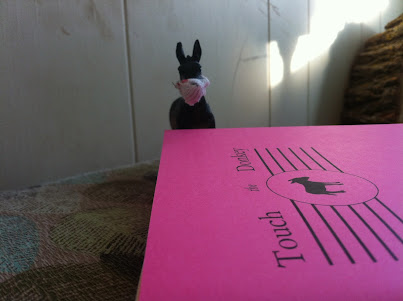 Prathna Lor is a living poet. Their first book, HEROISM/EULOGIES, is forthcoming.

Their three untitled poems appear in the twenty-seventh issue of Touch the Donkey.

Q: Tell me about the three untitled poems included in this issue.

A: I was thinking a lot about force and compression and how to get out of it. I still am. I had been teaching a couple of undergraduate modernist poetry courses, so I was reading a lot about emotion and contractility, sensation without sensitivity. And I suppose I’m trying to figure out how to captivate with affection that does not degrade what emotion can be or do. For some of the modernists, impersonal emotion reigned, which is a farce, a fancy. So I guess I’m thinking about ways to broach a more honest technique.

Q: How do these pieces compare to some of the other work you’ve been doing?

A: Right now, I’m trying to complete a novel. But my formal and sonic commitments remain the same. The challenge thus far has been trying to balance density, sonorousness, and uncertainty over a longer period of time in the work without resorting to a gimmick, pastiche, or arbitrary anchor. Poetry offers a lot of space and opportunity as well as precision; the novel does, too, but at a different scale. These poems are part of a process of experimenting with how far I can get with puncturing and receding.

Q: Is that how you differentiate your short poem-fragments with your work in the novel? Is it simply a matter of scale?

A: Scale is one of the compositional elements I am preoccupied with between works. I am either obsessed or possessed by a certain poetic impulse which I am trying to wring out of myself. Like there is a lyric singularity to which I return again and again. This impulse is inflamed at the level of the line which makes itself known in the stanza or the prosody of the novel; the scalar difference, for me, then, is how to anchor that delineation in varying structural rhythms and forms. What I’ve been thinking about a lot is this essence of return. E. M. Cioran discussed this in terms of the “agony” of the novelist who must return to that already well-trodden terrain of the literary. It is not so much a question of originality but one of excess, pleasure, revisitation, coming, again.

Q: Can one presume that these poems are part of some larger structure, or might be? It might simply be a matter of scale, but how easily have you been able to shift from the individual poem to the larger, full-length manuscript?

A: Yes, definitely. I tried to work that out, in a sense, in a chapbook, 7, 2, in terms of thinking about sustaining lyric over time. The difficulty, again, for me, is thinking about the breath of the poem, the work of voice and reading, over a longer period of time, or via a larger scale, when the poetic tenor I am trying to explore is so punctual, economical, propulsive. Rhythms and intensities would have to change, modulate, etc., but, of course, over the course of one’s life, I feel as though it is a single line, a single rhythm, towards which I am relentlessly returning, and I suppose that part of my anxiety about sustaining over time/distance is the fear of it dulling over each reiterative sensation.

Q: Why is the idea of extending and sustaining a lyric and lyric rhythm important to you, and how did you get here? What do you feel you can accomplish through such a structure that you might not be able to accomplish otherwise?

A: I long to touch the weight of the material. Mary Burger once said something funny about the New Narrativists who were all these poets trying to write things that looked like prose, obsessed with the question of narrative, and I have been continually pressed by this. There is something exacting, a kind of poetic pineal, about this desire for non/narrative to take hold, to grasp, to seize some kind of encounter between language and experience in a form that is at once fleeting and perpetual. And, certainly, there is something beautiful about a kind of magnitude that is achievable, a sense of regality, for me, to bring that voice along. There is something about the unfolding of form, of gathering each puncture, until it blossoms, monumentally. Again, for me, it’s about this idea of scale—of scale as range or difference—with which the mode of capture, of enrapture, along poetic nodals, can stitch the pulse of poetry like a good sequin dress.

Q: Your author biography mentions a forthcoming debut. Are these poems part of that debut? How do these poems fit alongside this book-to-come?

A: These poems were composed during the writing of my second chapbook, 7, 2, that I mentioned earlier. So I think what I was trying to exhaust in that moment was something about poetic piercing—all the pieces are short, fragmentary, and loosely bound together by a sense of this piercing. The things I am working on for the future are trying to develop from those lessons, now that I feel that I have somewhat exhausted those impulses—not because I do not like the impulses but because I would like to try on a different dress. Hence, my preoccupation with something more "universal" in the sense that some novelists have spoken about it, particularly Gail Scott, in terms of trying to touch something immortal in language. What I'm trying to move toward now in a couple of new projects is an approach to the lyric from the otherside, an analyric, where language, I think—I hope—is so tightly inversed, implosive, and miniature, that its secret blossoms can offer something stunning in all sorts of ways. As in a kind of lyric that is woven becauses language is constantly in a state of undress, duress, a stoppage that considers language not from the narrative view, or even the impossibility of its narrative view, but from its own pristine gutting.

A: That would be the essays of Wilson Harris.