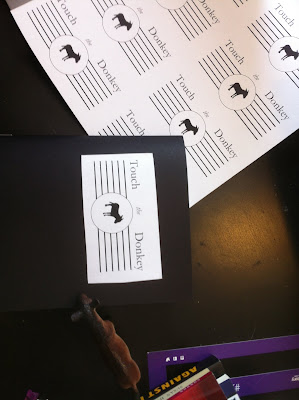 Tom Snarsky is a high school mathematics teacher. His chapbook of poems Threshold is available from Another New Calligraphy, and Recent Starred Trash is forthcoming from marlskarx. He lives in Chelsea, Massachusetts with his wife Kristi and their three cats: Niles, Daphne, and Asparagus.

His poems “Song,” “Cult of Mary” and “Something to Do With an Eyebrow” appear in the twenty-fifth issue of Touch the Donkey.

Q: Tell me about “Song,” “Cult of Mary” and “Something to Do With an Eyebrow.”

A: It’s funny: those poems were written most of a year ago, but they come full circle in a lot of ways. I wrote a poem on New Year’s Eve that also features Alfie Allen (my wife always teases me about my crush on him), and that poem’s “sweetness” chimes with the “sweetness” at the end of the Brigit Pegeen Kelly poem I’m trying to memorize right now (called, of course, “Song”). As for “Cult of Mary”, I think I’ve only ever written about time, and probably only ever will. “Song”—one of my favorite poems I’ve written, I think—was written while I proctored the Massachusetts state test for high schoolers, on an extremely complicit clipboard. That same test is coming up in another couple of weeks for my kids. [Note: at this time of writing, although Massachusetts has canceled school through at least May 4th, they still haven’t canceled this test.]

A: My friend jo ianni and I have been talking for a long time about minimalism in poetry. I send lots of screenshots of poems to my friends and directly into the internet; these three poems are part of the ongoing body of things I’ve written that are indebted to the shape & depth of a phone screen, a constraint so ubiquitous it’s stopped feeling like one. They pertain to (but do not solve) the following problem: can we write small poems that still somehow have enough oomph to question, to shake the firmament? Does a minimal poem always have to be a quietist mantra, or can it be more than that—do more than that?

Q: What kind of models have you had for the kinds of minimalism you’re attempting? How does one work to make the poem smaller?

A: There are so many poets who have written great small poems, from the lauded minimalist tradition of like Robert Lax and Aram Saroyan to the demajusculization chez lucille clifton to all the gorgeous short poems written by contemporary poets of every stripe (I’ll always remember Ariana Reines reciting the short first poem of Mercury, “Aria”, to our poetry class when I was in college). These poets taught me how short poems can live whole in the eye, ear, and heart—think about your favorite short poem, and I bet if you have one you know it perfectly—and they’ve always made me want desperately to emulate that plenitude. As for how one works to make the poem smaller, my own poems tend not to go that way; I tend to write lots of shorter poems without much editing, only some of which feel like they hang together in an interesting way. I very rarely find myself trying to take a larger poem down to more minimal measurements, although some of my heroes (like Anne-Marie Albiach, who I recall filled pages/notebooks margin to margin before cutting them down) worked that way. I still lack the perfect knowledge Stravinsky attributed to Webern, so instead I just kinda have to throw little poems together to see what stays, what catches.

Q: I would suggest, also, you look at Canadian poets such as Nelson Ball, Cameron Anstee, Jack Davis and Mark Truscott, if you aren’t aware of their work already. I’m curious: what is it about such short forms that appeal? What do you feel is possible through the short poetic form that might not be possible otherwise?

A: A beautiful reminder, thank you! I love Jack’s book Faunics and all of Mark’s books are amazing; I look forward to getting to know Cameron’s and Nelson’s work too.

I think the appeal of the short poem as a form, for me at least, might lie in how it simultaneously plays nicely with and challenges my fissiparous attention. A screen—in particular a phone screen, as I mentioned before—is one of my primary ways of engaging with poetry now, so poems that fit within that frame (and maybe also play with it a little qua constraint) habitually draw my eye. This certainly doesn’t mean long poems should be discounted in any way—the scroll is as fundamental to us now as the screen—but the poems that I feel like I’m able to take in whole, that become complete glyphs on my heart, are these short poems. (I love that people are working with/in this tablature as a form, too—think Alice Notley’s recent straight-to-Twitter vispo work, or the incredibly innovative ava hofmann (@st_somatic on Twitter).)

Your question also makes me wonder about the long poem’s place right now, too—I’ve only written a few long poems in my life and just sent one out that’s over a hundred lines, and in our moment (at this time of writing most everyone I love is at home social distancing) I wonder if the long poem might be privileged in its own way, as a form of immersion.

Q: With a chapbook in-print and another forthcoming, how do you feel your work has developed? Where do you see your work heading?

A: I think if my work develops, it might be in a drunkard’s-walk sort of way, where there’s lots of random movement and some arriving back to places I’ve already been (that hundred-plus-line poem I mentioned earlier is centered on a song—“October”, by Jackson C. Frank—which/who has been an unshakable ghostly presence for me for a long long while). Poetry is and has been my favorite technology for finding ways to be in unknowing, and that means I rarely have plans or trajectories for where the poems will go. It’s wonderful to be able to work at the level of the individual poem, which is sometimes long enough to be a small book (as is the case for Recent Starred Trash) or other times coalesces with others into a little collection, or a bigger one. I have a full-length MS now, provisionally titled Light-Up Swan, that is very much a living document, but it’s in no rush to get out into the world because I still know so little about its shape.

Q: Do you see important differences in working in the individual poem vs. working on more of a larger project or stretch of poems? Is there a difference in the ways in which you might approach either, or what you might hope to accomplish?

A: This is an amazing question! I’d love to know how different poets I admire would answer it, because for me I sort of think the answer is no—sometimes the poem is compact and totally itself, and other times it eeks into seriality or into several different poems, depending on some element of it that I never fully understand. I think the space of the serial most embodies, for me, what it’s like for poetry to be in between the short and the long poem; I love what serialish poems like “Hennecker’s Ditch” or chapbooks/series like Ben Mirov’s A Few Ideas From My Blackbox or sequences like Noelle Kocot’s unending procession of sonnets are able to do, and I think they stay honest in terms of that old Poe dictum of keeping lyricism confined to smaller temporal chunks. This is probably why so many of my early poems—some irredeemable, some not without hope—came out as serial poems. Or from reading too much Jack Spicer.

A: At different times in my life I’ve had books that I’d carry around, half to read in the way you’re describing—to reenergize—and half as pure comfort objects. Right now it’s this hardcover of Ashbery’s Flow Chart, but it’s been so many things before: Bronk’s The World, the Worldless in Paol Keineg’s syntactically deft French translation, Noelle Kocot’s Soul in Space, Ben Mirov’s Hider Roser, Camille Rankine’s Incorrect Merciful Impulses, Molly Brodak’s A Little Middle of the Night (all, in one person’s flawed opinion, perfect books)...there’s also a few that live in my car for ease of access, like Ariana Reines’s Mercury and Ashbery’s Houseboat Days and a dogeared Li Po/Tu Fu anthology and the crazily thin Tranströmer Selected and my equally ridiculously overthick Faber & Faber Wallace Stevens paperback Collected and Derek Gromadzki’s Pilgrimage Suites and Monica Youn’s Blackacre. There are surely many more than I can think of right now, but it’d be hard to overstate how much I’ve gotten from clutching each of these books during tough times.