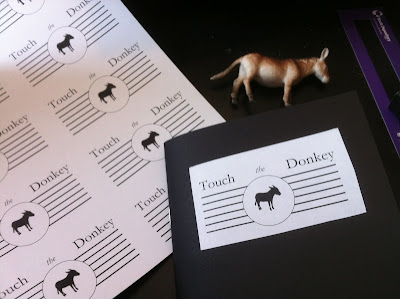 émilie kneifel is an artist, poet, critic, translator, and co-creator of PLAYD8s, a video interview series about unproductive exploration. find 'em at emiliekneifel.com, @emiliekneifel, and in Tiohtiáke, hopping and hoping.

Their poems “two siblings visit the third in toronto,” “one last august something,” “i read Marie Howe” and “b/rain fog” appear in the twenty-fifth issue of Touch the Donkey.

Q: Tell me about the poems “two siblings visit the third in toronto,” “one last august something,” “i read Marie Howe” and “b/rain fog.”

A: hm. they are all summer poems, which i think is significant because during the summer i always feel like the days have already ended, even though they’re really at their longest. the poems’ joy knows its own stakes, i think. the grief in beauty. that sort of thing.

because i often disperse or disappear into my emotional environment, we (the poems and i) are also trying to pry me out, or at least spot me in the goop, give me some grain. we’re trying to figure out how i figure into what happens to me. how am i happening to?

“two siblings” is the kid-greed of burning your tongue on a good thing, “one last” is an attempt to be a reliable narrator, “b/rain fog” tries to catch a symptom that catches me, and i think in “i read Marie Howe” i might be lying to myself. but they’re all wispy for sure. all finite.

A: the easiest answer is that they’re distant pieces of a manuscript; the truest answer is that they’re accomplices in my larger life project of trying to make something of this reality, to cup some kind of provisional self. building the manuscript was such a precious, agency-giving endeavour on its own, like playing with healing blocks that only snap into each other when it feels right, that i’m not sure i even want to call it a manuscript, to imply that i want it anywhere but on my shoulder and in nathan and nivi’s inboxes. i think i’m worried that trying to move it would knock the tower over. but i’ve also been trying to ask my fear out. i do want to get to know her better.

by the time this interview is published, a big, big baby will have finally dislodged from my throat: PLAYD8s, a video interview series co-created with nadia davoli where i interview poets, a scientist, an imaginary friend, and my grandmother about how they play. this is related because i feel like it means that my poems can take their dresses off for a while.

Q: Do you have a difficulty in getting work out into the world?

A: probably my greatest difficulty is that i feel so claustrophobic inhabiting anything driven by ego, and “getting work out into the world” feels irreconcilably ego-sticky sometimes. i get the most ooh lala out of the writing itself, so i am always asking myself about the point of the outward step. is it worth it? am i exploiting myself? also a big thing: how can i accomplish something without making others feel inadequate? i guess my for-now reason for doing it despite my doubts is that i want to prove myself wrong. i have to believe there’s a way to do all of this generously. also, well, i think i would like to have the chance of being known. i don’t mean famous; i mean being known, really known. you know? because i think in some ways recognition also often means some form of self-identification. it’s mutual. i daydream about mutually knowing+being known, via art art art.

Q: I’ve always thought that “making” is simply a normal, human impulse. It is each individual’s way of responding, whether to the outside or the inside (or both). To “make” and attempt to put out into the world is simply to engage in a conversation that is already ongoing, between so very many others. Even if one claims that art is insular, and seen only by other artists, it is still a response, so even to ‘make’ is to do so with the possibility of a further response in kind, don’t you think?

A: so, to be clear, i don’t think i’m some solitary figure living in a cabin in a vacuum; i was built and am being built by both the art i consume and the way i have been loved, and everything i make is inherently entangled with that. but i don’t know that i’m always “responding” so explicitly. i don’t know that it feels like a conversation so much as me wandering off with my backpack & tools procured from living and reading.

maybe you’re right, and maybe i’m strange, but – no, you know what, i’m going to stop hedging. as a kid, i built my whole self around the extrinsic. i know art can be just-mine because it doesn’t feel the way the rest of my life did/does, all pulled out by other people and their nebulous expectations. art is one of the only things that, for me, can have and retain inherent value – a value that becomes muddled once i introduce other people into the equation.

that’s not to say all art is like that; i love to write emails, a form that explicitly expects further response, and i guess i should acknowledge the fact that if something exists observably then, yeah, the possibility of someone else seeing it and responding is always there.

i just don’t know that you can ever talk about art in absolutes (except in this sentence, i guess, har-har). what i said earlier about ego has nothing to do with all art or anyone else at all, really. i don’t think i’m better than someone who does want to be famous or does get the most satisfaction out of sharing their work. it’s hard enough to figure out what makes you feel good in this life without being shamed for it. just like i’m not actually saying art is “purest” in isolation. i just think that for me, right now today, art is a relief because it can be like living alone. i can invite people over; there’s a door (the possibility you’re talking about), but i can also close it, and i get to choose what i put on the wall, and i get to decide when to answer a knock.

Q: How, for you, does a piece of writing begin?

A: i will never stop wanting to answer this question. elsewhere i’ve talked about it as a kind of inciting horniness, thanks to a melissa lozada-oliva tweet, but today i was thinking about the rilke quote “the good writer touches life often,” and how sometimes life also touches us. it felt like such a clean way to explain why trauma can be a starting point for art, because it’s life wrecking its way through your spiritual architecture. so today that’s my answer, that a poem begins when i touch life or when life crashes into me. a kind of generative contact, even if it begins in destruction.

like you, i’m also a critic/arts writer by trade but mostly by nature, meaning that art makes me iiiiiitch. that’s always been about the artist’s perceptual sensibility, how they’re experiencing the contact, what they happen to be noticing. case in point: at the montreal launch of her memoir, carmen maria machado said, “you can look anywhere when you watch a movie,” which shifted my skull.

i’m excited about this answer, because i love the image of a palm pressing into like, a giant iridescent membrane. mostly i’m giddy because i know my answer will change tomorrow, which is its own kind of beginning. my friend, the poet sanna wani, talks about the poetic impulse as a kind of mythical creature that she chases through the woods. there are so many ways to begin!!

my final answer, in a word, locking it in, is: a crush, in every sense.

Q: Have you any models for the kinds of work you’ve been doing, and been attempting?

A: yes, but they’re secret (naming names is like opening the oven while the bread bakes). but also, i feel simultaneously model-less; it’s more that my secrets stretch what’s possible.

to be less precious and give an actual answer to your question, rob: one thing i am swimming behind is the way other people love through their work. manahil bandukwala and sanna wani’s world-trembling collaborative work (autocorrected to “world”); billy-ray belcourt’s in-text citations, these little pecks of gratitude to maybe never be found by the citee. the epistolary form in all its iterations: sent and unsent, always a secret keeper. “i am made from you and i made this! this is made from you! this is made for you!”

Q: You mention that these poems are “summer poems.” Is there a difference in the shape or the tone of your poems through different seasons?

A: oh, absolutely. i think of hydrangeas, which are the coolest and bloom blue/pink/violet depending on the pH of the soil (autocorrected to “soul”). season, smell, time of day — it all leaves an imprint. i experience myself as pretty undifferentiated from my environment, so i think i find embodiment by plucking shreds from the world that have turned a specific colour.