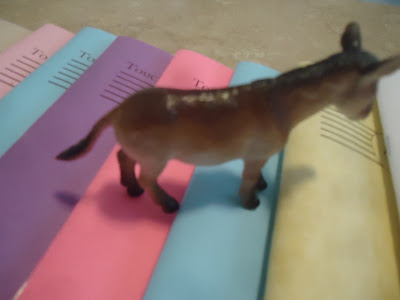 Michael Sikkema is the author of 4 full length collections of poetry, around a dozen chapbooks or collaborative chapbooks, and can be found most often in West Michigan, migrating northernly in the summer.

His poem “Eleven Possibilities” appears in the twenty-first issue of Touch the Donkey.

Q: Tell me about the poem “Eleven Possibilities.”

A: “Eleven Possibilities” is one section of a longer work that I wrote while I was thinking a lot about performance / fluxus / the interconnect of poetry and theater and the like. I was hoping to create something more for the stage than the page alone. I wanted a piece that would work if performed by several voices or just one. I wanted a piece that could be performed by someone who never met me, and could even be continued by someone else without me. It’s an open form that can be stretched and pulled and shaped to fit other people’s purposes. I wanted a piece that could have a separate life on its own, rather than being seen as a window into my soul or something. I wrote “Eleven Possibilities” and the larger text while composing a book called Bug Out Bag, which explores the imagination and art as a form of survival mechanism, much more necessary than “escapism.”

A: This piece fits into the Bug Out Bag manuscript because there are other pieces that explore and create an intersection between poetry and performance and multiple voices. It’s pretty far afield though from the newest stuff I’m working on, which is more of an opera-novel-thing (in verse and vispo and a cartoon-prose-poem and a kind of silent play and more to be determined by the muse at a later date).

Q: You seem to work on multiple projects simultaneously. Is this the way you’ve always worked? How does one project fit against another, and how do you keep track?

A: When I was first writing poems, I wrote just one poem at a time and they were mostly about a page long and I thought of them as closed off from one another. As I wrote more and stretched out into longer projects, like long poems, lyric sequences, prose poem sequences, chapbooks, etc, my idea of what a poem was started to change and grow. Finally *poetry* became what I wrote and the single poem was just one shape that could take. I almost never write stand-alone poems now because I feel like poems want to talk to other poems and form larger more complex nervous systems. Sometimes what appears as a stand-alone turns out to have been a stalking-horse for some longer thing that happens later.

For the last decade at least, I’ve worked on multiple projects at a time. Sometimes they end up folding into each other completely. Sometimes one takes shape faster and another gets tabled until the first one is done. Sometimes one never grows legs and doesn’t go anywhere and just chills in the notebook. I write as automatically as possible and then listen to the work, to figure out where it goes later. I compose in notebooks, on oversized paper, on notecards and almost never on a laptop, but when I start to type stuff up, it’s usually clear which project a piece wants to be with. I also end up cutting a lot of writing that doesn’t fit anywhere. Sometimes I go back to that and realize it is something all on its own or maybe a few pieces of it want to be sent out to journals or something.

Q: You make it sound as though your projects evolve rather organically. Do you see your work as a series of interconnected threads, or have you begun to see your writing practice as something larger and possibly singular?

A: I’m convinced that poetry happens all the time/poetry is all time and space and we occasionally visit it at the well, or create portals that let it through. I think of it as a living thing, one huge all encompassing thing that we experience in little bits and strings. I work to stay open to it and get out of the way so the work of poetry can happen. A reader might trace some thread through separate pieces or see an obsession on loop, and that’s great. I see a big nervous system sending messages back and forth through itself. I think books talk to each other just like poems do. I love doing a deep read on a poet or fiction writer and checking out many of their books to see what kind of an animal they make together. I’m much less interested in charting a linear beginning-to-end track of what rhetorical strategies they used or what they were obsessed with though.

Q: What influences brought you to this particular point in your work? What writers or writing sit in the back of your head as you write?

A: Lately I find myself thinking about

Sometimes the names on the list would be totally different.

Q: With four full-length poetry titles and a dozen or so chapbooks published to date, how do you feel your writing has developed? Where do you see your work headed?

A: Yay! Now, as of last week, it’s five full lengths. I think my writing has taken on more issues, grappled with a bigger worldview, gone deeper into the imagination, and became fully invested in organic form. I think I’m going deeper into speculative poetry that steals elements from other wonderful and sometimes trashy genres. I’m doing more vispo work and thinking about doing more collages. I’d love to collaborate with someone on a graphic novel. Working on an artist book or two sounds really challenging and fun. I would LOVE to find about 2-4 other people who wanted to write stuff for multiple voices that we could perform and have others perform too. I'd like to experiment with looping pedals and sound effects and compose audio chapbooks too.

Q: I’m curious about your collaborative work, as well as your exploration into vispo. What do you feel these explorations allow that might not have been possible otherwise?

A: Collaborations allow the collaborators access to a third mind, a new form of thinking and being. Not everyone can make a collab work with everyone else. When it works, there is a lot of mirroring, experimenting, way-finding, voice-throwing, and finally a sort of third mind that both people are occupying and writing into being. It can be like learning a new language and discovering all the unspoken assumptions that hide under common phrases. It’s a constant state of discovery and navigation.

Vispo is important because I think it cuts straight to our meaning making minds and short circuits a lot of our schooling, both the public institutional kind but also the corporate marketing kind, and can be really intimate. I work with young kids and end up thinking a lot about sight words and the immediate experience and reaction that those words cause. Vispo works similarly sometimes but not in a comfortable recognize-and-move-along fashion. Often it's much more arresting and invites you to spend time with it. It demands that we rethink what reading is.

Q: Finally (and you might already have answered a portion of this), who do you read to reenergize your own work? What particular works can’t you help but return to?

A: I don’t look for poetic inspiration in works of poetry for the most part. I read rabidly and love it and there are books that work as fuel for the fire, but I don’t usually look to a book of poems if my own writing is lacking. I’ll read fairy tales, myths, folktales, legends, sci fi, horror, or articles about the supernatural/aliens/cryptids/surveillance technology/etc on the internet. I’ll stroll through the oversized art aisles in the library. I’ll watch nature documentaries. I’ll watch trash cinema. I’ll do bibliomancy, erasures, exercises, word games. Tynes and I have a library of probably about a thousand books and I return to those often. I reread C.D. Wright’s Deepstep Come Shining once a year or so. I reread Barwin’s Moon Baboon Canoe at least once a year. I reread Tender Buttons pretty often. I reread Mullen’s Muse and Drudge. I reread Patchen’s picture-poems. I reread Descent of Allette once a year. I know I’ll be rereading Jen Bervin's Silk Poems once a year. I adore Micrograms by Jorge Carrera Andrade and reread it a couple times a year.