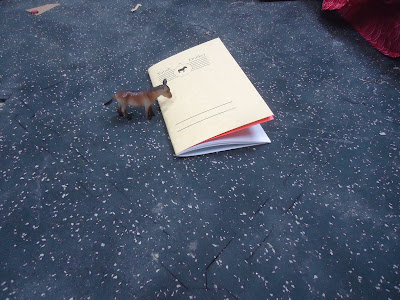 Adam Strauss lives in Louisville, KY.  He is the author of one full-length collection: For Days (BlazeVox). Most recently, poems of his appear in The Arsonist Magazine, Fence, Brooklyn Rail and Interim.  Ones are forthcoming in Dream Pop and Spork.

A: All of these poems are extremely influenced by Cole Swensen—both her sense of syntax and of ekphrasis—and they all embody my interest in faux ekphrasis: I like to think of the pieces as presenting paintings that don’t actually exist, and the syntax I tend towards thinking of as like whorls of paint or more specifically the act of stroking on paint, the movement as brush touches canvas. Put another way, they function, to borrow a great term from Douglas Kearney, as “preemptive ekphrasis.” More technically, the poems work with “syntactic doubling,” a term Christanne Miller helpfully uses when discussing one of the syntactic elements of Emily Dickinson. As for the space gaps: I don’t intend them as caesurae, but rather as sluiceways or sites of acceleration. I want the poems to happen quickly. I aim for kinetics not meditative arrest.

A: Over the past several years, I’ve been interested in hypotaxis, in writing really long somewhat conventional sentences which do not, for example, make use of “syntactic doubling.” The poems in Touch the Donkey are comparable in that they are driven by syntax, but I’m currently less interested in using extra white space. Too, I find myself currently trying for more and more rhyme, so that’s an obvious departure (though rhyme has been, in fits and starts, a consistent thread through my work). For the past several months I’ve been rather relentlessly trying my hand at Petrarchan sonnets, albeit sans measured lines; they probably don’t work, but I hope the practice yields something. My most recent manuscript imitates the poetry of Reginald Shepherd, and thus represents departure from anything I’ve done before, and also some continuity: I find myself always needing to find a syntax for an engine, and often write like pulling tissues from a box in the sense that I write a word or two, and then try and observe properties in that word or phrase and further push it in the next phrase.  Put another way, this recent work works via appositives—great chains of them!

Q: What do you feel is possible with working more formal structures that might not be possible otherwise?

A: I’m not really sure—it may be I simply have a predilection. Ultimately, my only desire for poetry is energy. I suppose I think writing in as many modes as possible—ultra formal included—means I can maximize expressing energy. I strive to be a virtuoso, and that means practicing multiple modes, not finding one and concentrating on it for manuscript upon manuscript. I think, too, my interest in, for example, the Petrarchan sonnet stems from, to crib from Yeats, a “fascination with what’s difficult.” Too, some ultra formal modes are so fitting for certain emotions: the villanelle does yearning and heartbreak so well with its obsessive repetition and dynamic change within that repetition. On a grumpy note: it endlessly bugs me when writers write unrhymed sonnets, unrhymed villanelles; rhyme possesses its own particular energy, so I absolutely believe it should not be abandoned. As well, to return to heartbreak and yearning, I often find myself feeling—well, maybe a reader doesn’t give two figs about my longing, but they still might be interested in seeing how I work rhyme and repetition. I think it can make for more engagement on a reader’s behalf—give them the chance to, like with gymnastics, judge (and hopefully enjoy!) the performance. I often wish poetry had a gymnastics system, with points given for difficulty levels. I think this could push people to some amazing feats—or stunning almost successes (Zukofsky’s “A-9”!!!!).

Q: You mention Louis Zukofsky and W.B. Yeats, among some other names; what other poets have influenced the ways in which you write, and approach writing? How did you get to where you are now, and where do you see your work headed?

A: My relationship to influence is somewhat vexed: many writers I adore I do not count as influences— Wallace Stevens, Marianne Moore, Elizabeth Bishop. I love-love-love Gwendolyn Brooks, but don’t feel good enough to call her an influence. This applies to Melvin Tolson’s astonishing Harlem Gallery as well; it’s a touchstone work for me, but hardly—to my knowledge—an influence. I cited Yeats, but don’t, one or three aside, particularly care for his poems. I am in love with the poems of George Herbert and do think they have influenced my interest in hypotaxis. I do adore Harryette Mullen and count her as an influence because she makes of word-play an engine and that certainly applies to some or much of what I’ve done and do. I think Zukofsky could count as an influence because he believes in such basics as counting words, and I certainly enjoy focusing on primaries: syllable, line-length, number of lines in a stanza, etc.  As well, he has tremendous range, writing everything from sonnet-sestina hybrids like “A-7” to the overt experimentalism of 80 Flowers. Rosmarie Waldrop has definitely influenced how I approach writing via her interest in serial work and syntactic doubling—she doesn’t call it that but she does, in her early lineated poems, make use of it. I would count Jorie Graham as an influence, even as I don’t believe I absolutely adore her work the way I do others—indeed, it’s through attempt at parody that I’ve come to be influenced by her.  Years ago I wrote a bunch of poems which could be said to have Plath as their tutelary spirit: every now and again her timbre surfaces in my poems. As for the future, I’m not quite sure: I’d love if Donne’s “La Corona” infiltrated my poetry, though I’d be surprised if I get this lucky! Finally, sometimes influences come other than via individual author: the now defunct blog Montevidayo greatly influenced me.

I should add that the major example of not particularly liking a poet’s work but nonetheless finding them a huge influence would be Robert Creeley: my idea of a Creeley poem, if not any actual Creeley poem, has certainly yielded scores. Too, I find my sense of linebreaks influenced by William Carlos Williams, a writer it took me years to finally love.

A: Most recently, my line-breaks have been lackluster, and it’s larger sweeps of lines that matter. In general, though, I try and have linebreaks be quickening agents and/or ones which via enjambment multiply sense. I do not mean to have a reader pause; if anything, I want linebreaks to function like glottal stops—merest halts which actually function as springboards to further articulation. As for stanza breaks, I’m less sure how to answer; I suppose it has to do with how I want to pace the poem, with how I want a reader’s eye to move down the page, tracking what occurs. Overall, it’s speed I’m after. I think poetry should happen at the speed of sound and/or light, or rather the intersection of the two. Too, I try and avoid linebreaks which seem choppy even as I adore sharp enjambment: I love the idea of breaks producing a kinetic pull, of producing an energetic drag—like hydraulics! Williams, at his best, does this so well! In some ways every linebreak is a part of one greater line, so that it’s all of the breaks together which constitute the actual motion.

Q: Your poems in this issue of Touch the Donkey suggest a far larger structure than what is presented here. How do you balance your attempts at speed against these longer, sustained structures?

A: You’re correct: these poems in Touch the Donkey come from a series of twenty one pieces. In part I think speed gets maintained because no one piece is very long, so a reader can move through the whole structure fairly quickly. Too, the titles constitute a kind of declension of color: blues move to greens, to reds and caramels, to yellows, to taupe and grey and white, and finally to the very contours of color, to properties and no actual hue—so there’s a kind of prismatic continuity in the titling which may, again, make for speed. I like to think of each poem in the series as being a painting in a display space, and sometimes galleries have wings—so hopefully I've ended up with a bird ready for lift-off...or already in flight!

A: I am seemingly always reading Cole Swensen. I love Gertrude Stein’s work. Gwendolyn Brooks is pretty much always in my mind. I have lately enjoyed the Joyelle McSweeney poems I’ve read. I look forward to yet again reading Harlem Gallery. I’ve been spending a lot of time reading Claudia Keelan’s new and selected We Step into the Sea and her book of essays Ecstatic Émigré, so hopefully those works burble through what I do next. Emily Dickinson always proves freshening and I’ve been loving rereading Cesar Vallejo’s Trilce. I probably ought to binge on the last ten years of Susan Howe’s writing though I have yet to get the books. I’m permanently in love with Jay Wright, though again I’m years behind on reading his work. For years I’ve been meaning to read Jayne Cortez: I don’t know her work well but suspect it might help enliven me—Harryette Mullen has a poem titled “Fancy Cortex” in homage to her and anyone Mullen pays homage to equals someone I really need to check out! Finally, it may well be time to start reading Nathaniel Mackey again! And I should definitely get my hands on the Joris’ translations of Paul Celan's later works!  I’d love if I started working with compound words!
Posted by rob mclennan at 10:00 AM