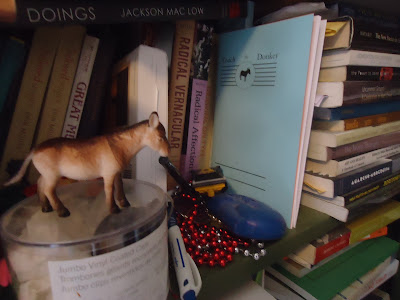 Stephanie Strickland has published 8 books of poetry, most recently Dragon Logic and V: WaveTercets / Losing L’una, and 11 works of electronic literature. Zone : Zero, book + CD, includes the poem slippingglimpse which maps text to Atlantic wave patterns. Recent digital poems include House of Trust with Ian Hatcher and Hours of the Night with M.D. Coverley. A volume of New & Selected Poems, How the Universe Is Made, is forthcoming from Ahsahta Press in 2019. http://stephaniestrickland.com.

Her poems “e=mc2   :  Not the Whole Story,” “Hum,” “Separation of Messages as a Form of Work,” “Black Glass Horizon,” “Solstice” and “Distaff Tech” appear in the nineteenth issue of Touch the Donkey.

A: I can say that half of them are ancient (unfinished) poems that I suddenly felt called to readdress, as if their time had come, and half were written last summer, part of a possible chapbook, One Sentence to Save In a Cataclysm.

The older ones are “Hum” and “Separation of Messages as a Form of Work,” and “Solstice.”

“Hum” is a poem of rage and grief, oscillating perspectives.

“Separation of Messages as a Form of Work” treats a truth about coding and decoding quite off-handedly—and yet directly, namely that the message can persist. Which is to say that d  s   i   d   e   r   r  o   permutes to “disorder” (it also includes “désir,” “deseo,” etc.); and C. Shannon is both a citation, see Shannon, and his initial:  Claude Shannon, 1916-2001, American mathematician, electrical engineer, cryptographer, “father of information theory”; and Cue E.D. is, of course, also q.e.d., E.D. being Emily Dickinson. “To simulate—is stinging work—” is from Dickinson 443. Between what you hear, what you see, and the number of layers you discern, requisite work reveals a (indeed, many) messages.

“Solstice” is a direct description of the winter solstice in my part of the world, a turning you think will never come.

A: I am working on a number of these older poems, ones I only rediscovered when a journal solicited poems from me for a particular issue but did not allow multiply submitted ones.

Other current poems seem to come from a sense of possible cataclysm. I explore what kinds of writing I would want to save, or change, or rely on, in order to face this kind of unknown.

Many poets who write from/about/with science want to affect scientists. Others want to affect public perception. I share with Buckminster Fuller an urgent sense that new lexicon and syntax are required. First of all, because language based on ancient physics—the sun rises, the sun sets—does not convey, much less entrain, our current understandings of mathematics, measurement, or instrumentation. The second reason to re-create a lexicon is to make clear how a powerfully imposed science understanding directly affects social justice and all else.

“Distaff Tech” is a tribute to Maryam Mirzakani, an Iranian mathematician, the first woman to win a Fields Medal (the highest mathematical honor), who died of breast cancer at age 40. Her work explored multiple fields, but in particular questions of geometry and topology. She drew her thinking on large sheets of paper on the floor, working alongside her small daughter. The poem contrasts the opening spaces she envisioned with the knots classified by Morwen Thistlethwaite. It recounts many mathematical achievements of women, often not recognized as such at the time, and the distinctly different perspective the “distaff” contribution brought. It also suggests the danger of certain technological perspectives if they are not opposed by what seem to be “marginal” perspectives, marginal in this case on account of gender.

Q: I’m fascinated by the way you use space, whether with the individual line or word, or simply across the length and breadth of the page. Do you see this as a visual structure, or something akin to breath? Or possibly both (or neither)?

A: For me, a poem is always in motion, flying, floating, pausing, in space and across a spectrum:  from internally spoken, to spoken aloud, to handwritten page, to printed page, to any one of various screens, to an interactive interface, to its place in a physical space of 3 dimensions, to hologrammatic space, to a virtual space of any number of dimensions. There is both a (breath) rhythm and a (visual) architecture at any point. I wanted my book True North to move around a pole of the 5 “True North” poems as if they formed a maypole. Still not possible! The print page is a kind of flash capture of a structure in motion. For me it should recall and be a prompt to its other possible forms and yet be firm enough to remain in the mind as an image.

The calligraphic or printed page has of course been deeply studied over centuries. I just read the magnificently produced essay-catalog for the Frankenstein exhibit at the Morgan. I realized that I had forgotten how rewarding a truly beautifully made book could be to read. A phone screen, by contrast, is a display tailored for ad banners and headlines.

Here is a flying poem that is also still in space and different for every walker: 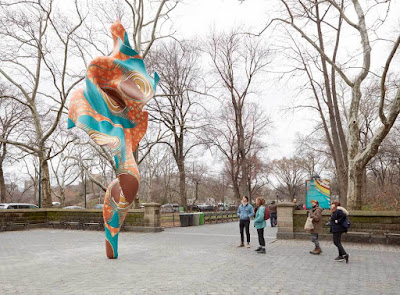 Q: How do you approach reworking older poems? Are you simply picking up where you left off, or are you completely tearing apart and rebuilding from a different perspective?

A: These three were very close to their final form when I found them. I think I became more willing to accept them as they were and to know why I wrote them. In other cases, though, I have to do a lot more re-encountering to get my intuition or initial impulse adequately accommodated. Some poems are very resistant, yet I still understand what I wanted, just not how to do it. Some get extensively reworked and are usually shorter and shapelier.

Q: Your published work includes digital collaborations; how do your explorations through both digital and collaboration potentially affect the way you approach your solo text-based works?

A: My sense of the number of ways a poem can be expands with digital means. The affordances e-lit offers and the increasing number of forms it takes, as the technology changes, made a deep impression on me.

My digital collaborations are mostly of two kinds. Sometimes, someone else and I seem to have a kind of mind meld as we feel our way to the realization of a project that excites us both equally. These poems are usually based on texts I have written, but these change and become full in ways we both discover, and the process of joint discovery is intensely enjoyable. Other times, it is more of a negotiation to agree on the parameters of a project, and to discover together how the text will be generated or discovered or written or presented.

Preparing a poem for an installation, or as a performance piece integrated with music and dance, is also a very different kind of text work. Nothing is really “solo” when you think about it. You are always working within a positive and negative tradition and with what is happening in the world. I believe each modality of poetry does something none of the others can do, as well, but choosing or finding the most resonant way of working becomes in a way more difficult the more techniques you command. Some projects are so extensive that they require a crew of collaborators.

Q: How do you approach putting together a book-length manuscript? Are you working on individual poems that slowly begin to shape themselves into something larger, or are you working on a larger structure from the offset? How do your books even begin?

A: The answer is different for every book! Transitions between poems are always important, as well as the overall structure, which in simpler books is a through line. Strangely, How the Universe Is Made:  Poems New & Selected, which is forthcoming in February, does have a through line, even though it is gathered from all the books and even describes the digital works. Dan Beachy-Quick says, “…the selections from the books are making their own true book, a traceable concern that widens and deepens … as it progresses.”

My first book, Give the Body Back, is a single sequence focused largely on historical women and women in my family. My next, The Red Virgin:  A Poem of Simone Weil, is a tribute to the life and work of Weil. The way I acknowledged the welter of views about her—for some she is a mystic, for some a political activist, some see the philosopher, and I see her as a performance artist as well—was to structure the book so you could enter it at any point, read to the end and then turn to the beginning, always making a circle, but a different one depending where you started. The poems were titled in such a way that the table of contents is almost entirely alphabetic, resembling an index.

The next, True North, was a deeper encounter with both history and science, different forms of truth-seeking. As I said before, I saw the parts as streamers round a flag pole (which led me to attempt a digital version in very early beta software). The flag pole is made of the 5 “True North” poems which tell you how find true north using only stick and string. The streamer sections are The Mother-Lost World, Blue Planet Blues, Language Is a Cast of the Human Mind, Numbers Nesting In Numbers-Nesting-In-Numbers, and There Was an Old Woman.

The most adventurous organization was for V: WaveSon.nets / Losing L’una. It is two books in one, bound upside down to each other, with a website URL in the middle. You have to literally  turn the book over and upside down and go online to get a complete view! Each section has a different numbering system, one is the usual and one is based on the U. S. government document numbering system. The Vniverse (Shockwave) website was developed together with the book and published simultaneously. The Losing L’una part also has a separate associated digital poem. The text for the WaveSon.nets was written in one concentrated interval, one long scroll of tercets. I organized it into 15-line “Son.nets” which do not necessarily start or end on a given page, but rather run on, in a wave of course. In 2014, this book was out of print and a small multimedia press, SpringGun, wanted to republish it. By then, in an era of web reading, I knew people would be comfortable with the original long scroll, and we presented that way with headers on each page designating which online constellation the tercets belong to. Called V: WaveTercets / Losing L’una, this book has an accompanying iPad app constructed with Ian Hatcher, in software very different from Shockwave. In this app, you can draw your own constellations, and there is an Oracle.

The next book, Zone : Zero, was published with a CD and incorporates the text version of two digital poems, Ballad of Sand and Harry Soot and slippingglimpse. It is also organized in 5 parts:  Zone ARMORY War, Zone MOAT Else,  Zone DUNGEON Body, Zone RAMPART Logic, and Zone MOTE Else. Finally, Dragon Logic, all text! But still in sections:  e-Dragons, Sea Dragons, Hunger Dragons of Unstable Ruin, Dragon Maps, Alive Inside the Dragons, Codemakers, and Afterword.

WE NEED TO HAVE THIS MEETING
AT THIS TREE

AIN’ EVEN BEEN
PLANTED
YET