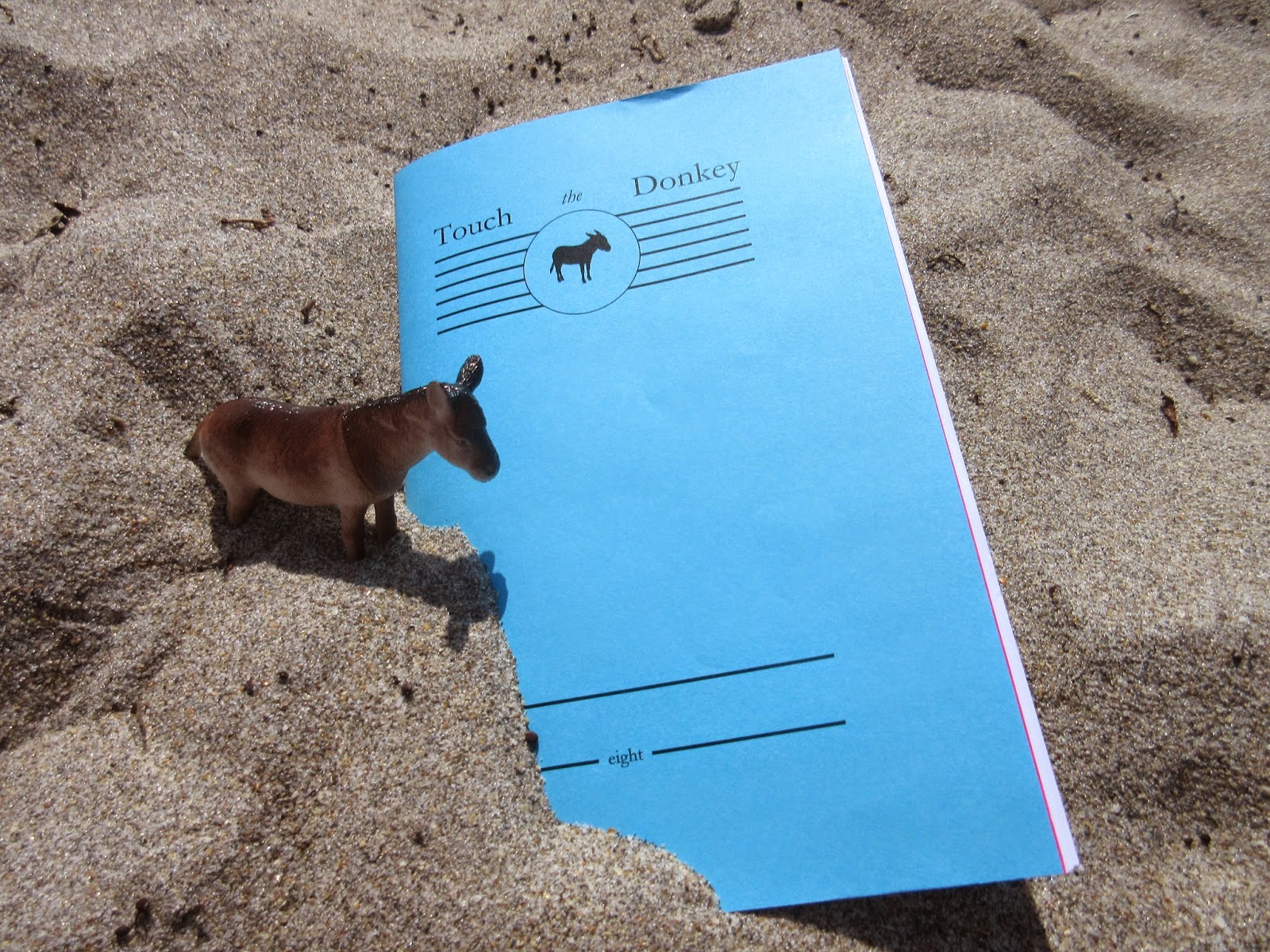 Billy Mavreas is an artist and writer born, raised and living in Montreal, Quebec. He has participated in many overlapping scenes, drawing posters first for the punk rock music scene in the late 1980s and then for spoken-word events though out the mid-nineties. International mail-art, asemic writing, local comics, zines and chapbooks all contributed to the push and pull of his art practice.

He is the author of three graphic novels, one book of posters as well as the producer of several chapbooks that move between visual poetry, drawing, collage and comics.

Along with his artist wife, Emilie O’Brien, he operates Monastiraki, a gallery and curiosity shop in the Mile-End neighbourhood.

He has four visual poems, “From A Scholarship Of Insects,” in the eighth issue of Touch the Donkey.

Q: Tell me about the four poems that make up “From A Scholarship Of Insects.”

A: The four pieces that make up “From A Scholarship Of Insects” act together in concert, they elaborate upon an unfinished poem that we will never read. Instead of presenting that unfinished source poem, I elected to present four divergent trends emanating from it.  I approached each page as a separate tone, a certain gesture or chirping or trace that perhaps an insect of sorts would chance to leave on a page. I considered the hypothetical naming of a group of insects as a scholarship, intending to illustrate rather different academic approaches to their fields of study. We then have subtle muted precision, bold point form, polyphonic chorus as well as straight up English text outlining options, to anchor any wanderings. Each visual treatment is lifted from that text and manipulated until the desired effect is reached.

Q: How do these pieces relate to the previous work you’ve done with visual poetry?

A: Most of my recent work in visual poetry starts with a source text, usually a diagram or even a photograph. This source material then gets extensive editorial treatment as I lose track of what it originally looked like or referred to. The process is essentially radical collage. I manipulate the source and apply layers of cut and paste, veering into directions unheralded.

In this case the source text was my own and it was text in the proper sense. Though there was considerable manipulations involved, I also left some text intact in order to position the visual pieces, to situate them in the eyes of the reader, with their source. One can with some scrutiny see how the pieces visually relate to the text provided in the last piece.

Q: I’m curious as to the intersection between your poetry work and your graphic novels. One so rarely sees anyone producing visual poems also producing graphic novels. Do your two forms intersect at any point, or relate to each other at all? Are they unrelated threads, or part of a larger exploration?

A: I’m curious about that too! I’ve made many formalist explorations within comics which work very well with experiments in typography, lettering and script. Also, my drawing style borrows a lot from the gestural strokes of handwriting and my poetry often evokes the details found in hidden corners of graphic work, the corners that are not the main attraction. They both deal with the themes that I explore in general, themes of communication, mystery, invisible worlds and accretion. I tend towards polyvalence in my art, making installation, conceptual work, sound works, sculpture, painting as well as poetry and comics. Every tendency informs every other. I’d like to think it’s all building towards something huge and awesome but we’ll see. It may just all end up as a strange collection of trajectories, oddball folk art museum of the soul.

Many artists I’ve seen who explore visual poetry and comics tend to stay closer to the realm of abstract or experimental comics. In my case my comics have been experimental and I still make abstract comic work but I’ve been tending towards more direct narrative, straight up comic work so to speak, which is a great challenge, whereas my poetry tends way more towards abstraction, conceptual writing and visual poetics. My poetry that isn’t visual is usually rock lyrics, bumper stickers, band names and other stuff that remains more or less private, unpublished or juvenile.

Q: Has the movement “towards more direct narrative, straight up comic work” influenced, in any way, your poetry heading further “towards abstraction, conceptual writing and visual poetics”?

A: I don’t think so. My many tendencies co-exist. As I get on in experience I feel the pressure to give my college best to forms I love. I want to be able to make decent comics that kids can enjoy, that anyone can enjoy really. Some of the power of comics lies in its potential accessibility. As I feel I’ve made some decent experimental comics, I also want the same satisfaction with accessible comics. I’m almost there. I’ll need to simplify things a tad. Work harder at it, too. The same drive would have me want to write at least one decent science fiction short story or fantasy novel. I feel I must honour my early loves.

I also love working in forms that are meant for tiny audiences of like minded people. I want to indulge my love for arcana but I can also appreciate my desire to be straightforward with text as well. In the last year I’ve worked at clear prose writing, anecdotal stuff, quotidian stuff. It’s been very liberating. I’ll end my years writing sonnets or something, who knows.

Q: So your explorations into poetry move beyond concrete and visual, and into text? For poetry: who have your models and influences been so far? What writers and artists have shaped the way you think about the form?

A: I studied literature but that was 30 odd years ago and the usual cast of characters left an impression, the canonical bigwigs we studied from 1989 to 1991. My personal reading though remained in genre fiction so I have always skirted between high and low cultures, as they are described.

My biggest influences in visual and concrete poetry are not individuals but books and not specific books at that. I collect obscure volumes usually dated 1972 that are comprised of text, cut-ups, collage, poetry of all types. A beat up anthology of international concrete poetry I found in a second hand bookshop when I was 16 started this fascination. I want to emulate the aesthetic I find in these books. Another influence is the high contrast black and white xerography and rubber stamping I encountered upon entering the world of industrial culture / mail-art / fanzines in the late 1980s. An early correspondence with jwcurry informed much of what I later did. The alien documents from such mail-artists as Serge Segay and J. Lehmus among many others intrigued me. At the time I was doing a lot of psychedelic lettering and symbol / logo design. A strong machine aesthetic came and informed my hippie sensibility. My experiments with photocopy machines at the time also yielded happy accidents. There’s no looking back, though I still draw by hand I love the results that copy machines give. Nowadays I use digital tech to replicate that effect.

Of course, hooking up with people like Tim Gaze and Derek Beaulieu, who have both been great supporters of mine, has served to strengthen the idea that I should continue doing what I am doing.

A: My poetry has moved from stand alone poems (whether text or visual) to suites and longer movements of pieces. I like the idea of a series of works pivoting around a central theme or starting point. I hope to address my concerns and desires vis a vis visual poetry with a book length project or two. I need to actualize my book fetish by adding another odd pamphlet into the pile.

I also feel more confident in presenting some of my visual poetry as poetry and not as graphics or visual art. Of course I am ever thankful that my experience in visual art informs me and forces me to maintain certain graphic standards.

My writing will always bend towards a project orientated practice culminating in either a chapbook or a dozen chapbooks or a proper published thing. I enjoy small projects, small suites, etc. but would probably toss it all out if I was able to find the discipline to work on a fantasy trilogy. No joke. Until then though I will continue to divide my time between comics and poetics but there’s no saying that all my tendencies won’t end up between the covers of one book. That would be the dream of dreams.

I read mostly in non-fiction, usually studies of mythology, science, spirituality, art history. That stuff is interspersed with forays into SF&F short stories and YA or kids books. I’m always bringing in new books I find and pouring over them. Collections of logotypes, vintage graphic design manuals, old grammars, random scraps and ephemera keep my interest the most. There are many books I revisit and many more I want to read. I’m terribly ignorant of contemporary poetry itself except the work of people I trade with and even then I often fetishize the object and study the form rather than the content. That’s my big admission of the day.

The stuff I do reread is inane humour comics.
Posted by rob mclennan at 2:18 PM