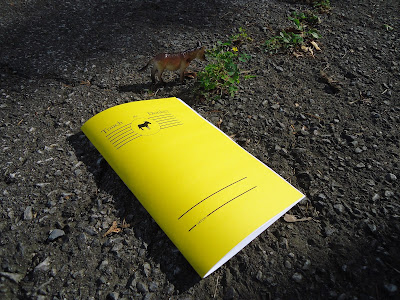 Sarah Mangold is the author of Electrical Theories of Femininity just out from Black Radish Books and Household Mechanics (New Issues). Her most recent chapbooks include The Goddess Can Be Recognized By Her Step (dusie kollektiv), Parlor (above/ground), and An Antenna Called the Body (LRL Textile Editions), with a new chapbook forthcoming in 2016 via above/ground press. New work appears in: Conjunctions, Kenyon Review, h_ngm_n and Lit. She is the recipient of a 2013 NEA Literature Fellowship and lives near Seattle.

Her poems “The Wolf-Man Recounting a Dream,” “We No Longer Feel Ourselves to be Men of the Cathedral,” “There’s Nothing to Fear Now that Big Foot is Captured,” “The Sad Colossal Yes” and “Where The North Begins” appear in the seventh issue of Touch the Donkey.

Q: Tell me about the poems “The Wolf-Man Recounting a Dream,” “We No Longer Feel Ourselves to be Men of the Cathedral,” “There’s Nothing to Fear Now that Big Foot is Captured,” “The Sad Colossal Yes” and “Where The North Begins.”

A: As a set of poems, they are the first poems I worked on after completing Electrical Theories of Femininity. There’s still a lot of technology and the archive lurking. I thought I might be at the start of a “Monster” series with technology and “the other” and classic movie monsters, but it has morphed into a series around the romanticized idea of “nature” and the “natural” through taxidermy and the body. The Monsters were my bridge and still very present. Fun fact: In “We No Longer Feel Ourselves to be Men of the Cathedral,” the line with loudspeaker, touch tone telephone, steering wheel comes from a footnote in A Companion to Digital Literary Studies. In 1999 The MIT Technology Review published a list of the ten most influential interface interventions and those were #1, 2 & 3.

Q: How do you feel they compare to, or even extend, the poems that make up Electrical Theories of Femininity?

A: I think they’re very similar, I thought for a time I might add “The Wolf-Man” to the book but decided against it trying to make a clean break to the next project. Plus things were getting more monster-y and that didn’t fit with Electrical Theories of Femininity. I think they let me move through the transition phase from one book to the next.

Q: How do you feel your work has progressed over the past decade or so, through two published books and a small mound of chapbooks? Where do you see your work headed?

A: I know I’ve been much more conscious about form and printing realities since my first book was published. I was very much a “composition by field” poet, the field being an 8 ½  x 11 page, when I first started writing. After reformatting the first book to fit a standard 6 x 9 book size, I’m much more conscious from the beginning that 6 x 9 might be the ultimate final form. I don’t know if that’s good or bad, but I do find myself wondering if I’m making more block poems because those will fit without much disruption onto a standard printed page. I also wonder if working in a cube farm for the last seven years has influenced how I structure my work. I do alternate the journal sizes I write in to see if different paper and line widths influence the shape of the poems. I don’t feel like I’m purposely not writing giant spacey poems but I do have that feeling in the back of my mind about space concerns. So in the future, that will probably be something I keep exploring and hopefully stop worrying about. My work has become more thematic, and to my surprise I’ve been enjoying that. I really like doing research and reading deep into a subject so the thematic approach has been satisfying and a continual project. I find myself doing less physical collage, cutting words up and taping them together, and more note taking and reassembling the words by rewriting and then typing it up and deleting and moving things around that way. This might also be a symptom of my current source materials, more rare books and fragile pages. I could see starting to work with visual images within the poems and getting into more book design, starting to compose “a book” instead of individual poems that happen to get along really well.

Q: Do you really feel there is such a vast difference between the ways in which you’ve begun composing “the book,” as opposed to a series of “individual poems that happen to get along really well” in chapbook or book-form?

A: I don’t know that it’s a vast difference really, but with my current writing this is the first time I’ve felt early-on that I’m writing a book instead of a series of poems and we’ll see what happens. I find myself thinking on a larger scale about pacing and the visuality of the pages—if I do x here, I should plan on x in ten more pages etc. In the past I did this in the editing stage and not during the initial writing. I’m wondering how/if this will change my writing process.

Q: Does this shift allow you to work on multiple projects concurrently, or are you able to only work on a single project at any given time? And how do you know when something fits with the current project: is it a matter of subject or style, or something less obvious, such as tone or something within the structure of the line?

A: Hmm good question. I don’t really have time to work on more than one writing project, but I do feel like it would be possible if there were more hours in the day. Right now I’m writing towards this book, so it’s more subject based, taxidermy/nature/gender/body, and I’m constantly taking out poems or reconfiguring them—all things I’d normally do after everything was written and I began to assemble a chapbook or book.

Q: One would presume such a compositional approach would allow you to see the project as a whole, and write to fill perceived gaps. How have you found the composition of such pieces? Do they flow easier, knowing they are there to complete a singular project, or have they been trickier to write than the pieces you wrote without such specific purpose?

A: The singular project seems to flow easier, probably because my intention is always directed towards this bigger picture and subject and not necessarily tied to starting over every time.

Q: Would you say that you regularly compose individual poems and larger projects by way of arranging around subject over structure, or is it a combination of the two?

A: Always a combination of the two.

A: I always go back to Barbara Guest and Susan Howe, they let the breath back in. I’m always looking at Guest’s Stripped Tales or thinking I should be reading it again or the Countess from Minneapolis. I’ve also found reading the journals Conjunctions and The Chicago Review particularly energizing for my own practice.
Posted by rob mclennan at 10:02 AM