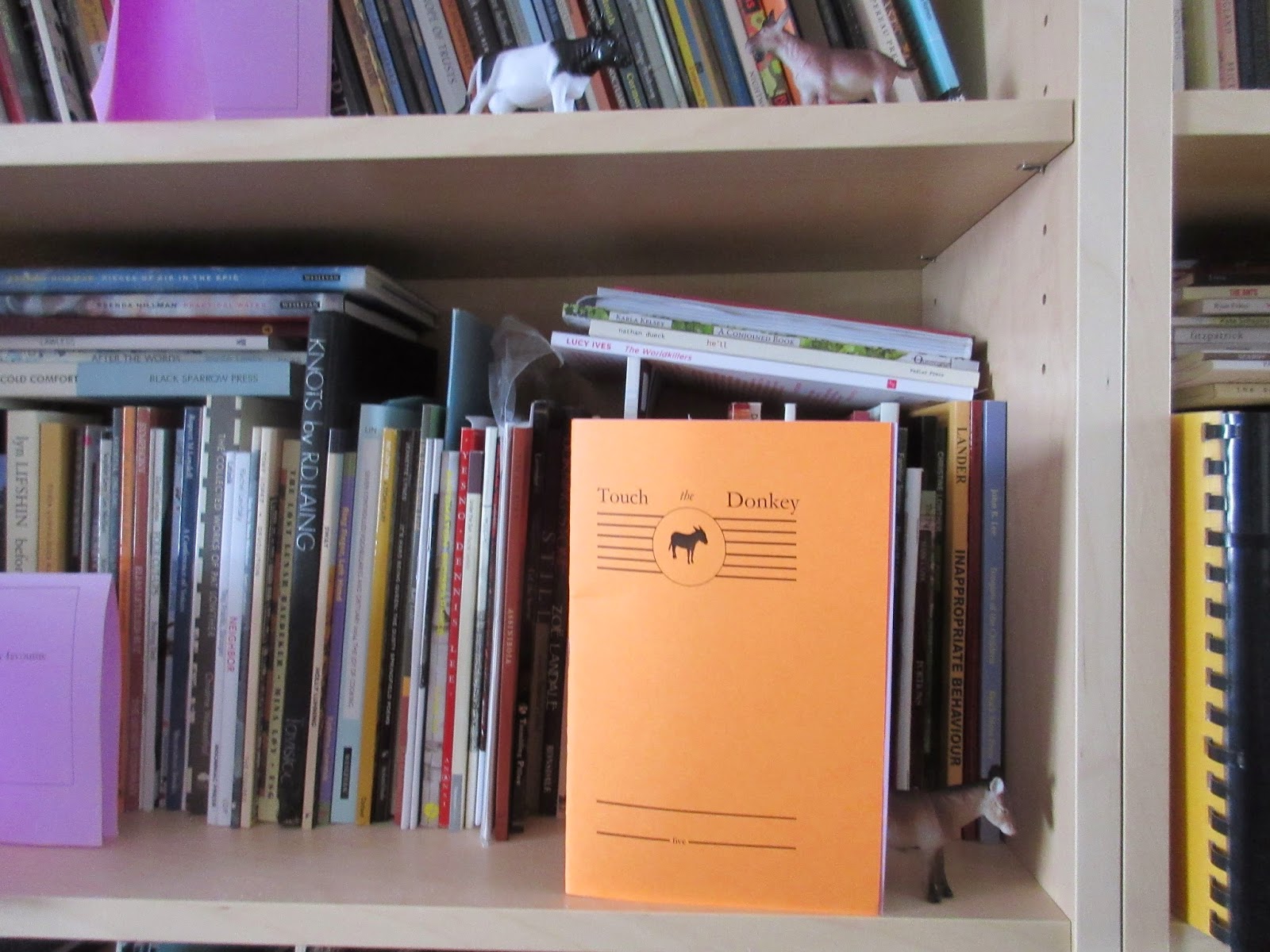 ryan fitzpatrick is a poet and critic living in Vancouver. With Jonathan Ball, he co-edited Why Poetry Sucks: An Anthology of Humorous Experimental Canadian Poetry (Insomniac, 2014). He is the author of Fortified Castles (Talonbooks, 2014) and Fake Math (Snare Books, 2007).

His poems “What History?” and “Kinder, Gentler” appear in the fifth issue of Touch the Donkey.

Q: Tell me about the poems “What History?” and “Kinder, Gentler.”

A: Both of these poems are standalones written mostly using the styles and procedures of my first book Fake Math – the poems funnily live in a folder on my computer labelled “Faker Math” – meaning the poems are loose improvisations or riffs on something (or more likely a few things) I’d been researching on the internet, often using found language from my internet searches. I like writing these one-offs because they’re quick and don’t require me to compose according to a set of self-imposed style guidelines or constraints that I might work up for a larger project. The process allows for quicker composition – I can knock one off in about 15 minutes – which works because it allows me to try things that might not work or, better, that do work because they carry the germ of something bigger.

Q: What is it about the procedures of your first collection that still attracts you? And do you normally work against a series of constraints? And, if you do enough “one-offs” from the same set of procedures, don’t they actually become their own project (and therefore, no longer “one-offs”)?

A: I think this is exactly it. What I like is the way the looseness of the improvisation can lead into something firmer (but doesn’t necessarily). My second book, Fortified Castles, came directly out of a couple one offs where I began to feed I-statements into Google (“I am so frightened” and “I fell asleep last night” were the first couple, I think), working with the search results. I liked the kind of material that came out so I stuck with it, playing with the shape of the poems themselves as I went. Working into a project from the ground up means that I work from a series of compositional problems or questions – questions that don’t emerge without the experimentation of doing something that doesn’t fit in a bigger project.

As for the procedures around Fake Math (which is a loose version of Google sculpting, which is, I think, a variation or inversion of cut up), they’ve stuck with me because of their malleability and the way that they can push me into surprising textual spaces. That said, Google’s algorithms have gotten too good at finding what you actually want, which is a problem for someone not looking for anything specific. So, I’ve been wondering about the usefulness of the practice going forward.

Q: Would you consider your process pure flarf or simply incorporating flarf into your compositional process? Either way, the process of attempting to remove the author is an intriguing one. What is it about the procedure that attracts?

A: I view Flarf as a historical moment rather than an aesthetic style or process, though it carries forward in the practices of a number of writers who weren't directly involved in the original Flarf group, including myself. Flarf was (is?) a messy proposition, caught between conceptual and procedural practices while also deeply invested in improvisation. I'm not sure what a “pure” Flarf might look like, since it was already an “impure” practice, and, to be honest, it was this messiness that attracted (and still attracts) me to the procedures of that original group, at least as I understood them. What keeps some version of these procedures important to my work is a combination of their flexibility, their ability to push the work forward because of a (seemingly) endless pool of material to work with, and the way that, unlike a “pure” conceptualism that staves off transparent expression by making the author the idea-man at the beginning of the process, it turns composition into a game of improvisational editing, chipping away at the mess of the universe to make something messier.

Q: What is, or at least has been so far, your normal process of putting together a manuscript?

A: Do other writers have a standard process for putting together a manuscript? For me, in my handful of opportunities, the process has been different each time, but the aim shared by all of them was making sure that the poems cohered somehow into a larger picture. What that’s meant for me so far is taking a position between the careful editing and sequencing of seemingly disparate material and the conceiving of a pre-written plan, making sense of that position in a way that helps articulate the specific questions and issues at play in a given project. I’ve found that, increasingly, I’ve moved from organizing my scattered material (what I did in Fake Math) to starting with a strong idea for a book-length project (my next project, Field Guide, which is a guide for spotting extinct species), a move that I suspect has to do with both my interest in the long poem as a genre and the way it seems that the book-length project has become the dominant form for contemporary poetry of all stripes in Canada (a move that I suspect has to do with a perceived marketability of projects with strong conceptual and narrative frames). But of course, who knows? I prefer to work through the what, how, and why of a project simulataneously, letting form, content, procedure, and concept affect and infect one another.

Q: After two trade collections, multiple chapbooks and your current work-in-progress over the space of nearly a decade, how do you feel your work has developed?

A: This is a huge question, rob, and I’m skeptical about linear narratives about the development of any artist’s work, but I do think that over the course of the last decade I’ve slowed down and gotten more deliberate in the way I put things together. I’m writing much less than I was in my twenties and things tend to fall into larger projects and sequences that need lengthy periods of editing to make them work.

In the spirit of this, I just wrote and deleted the same sentence three times. The sentence said something about craft and politics and the defended distance between them in the loudest and most reactionary corners of contemporary poetry criticism that sometimes act as if craft and politics aren’t deeply connected (hint: they are). What I wanted to say is that my relationship to these poles (craft, politics) has shifted, but I stopped myself because I’m not sure how. I’ve gotten relationally messier and formally cleaner. I’ve moved to longer forms with more iteration that attempt to retain an unpredictability. I’ve ached to find ways to cut to the chase politically while also smuggling that politics into a seemingly tame package. I’ve moved to uglier content. I’ve gotten more laughs by being more sincere. I’ve tried to undercut expectations through long form set-ups and disruptions. And mostly, I’ve increasingly tried to give myself the time and space to work out increasingly complex sets of ideas that emerge from simple problems and hunches.

Q: You started publishing during your time in Calgary, when you were involved in a vibrant community of writers, publishers and critics that surrounded the University of Calgary and filling Station magazine. Now that you’ve been in Vancouver for a while, are you noticing any difference in how you approach writing, publishing or a literary community? Is there even a difference? And, might the long-dormant MODL Press ever return?

A: Moving from one city to another is tough and I’ve only just started to get my legs in the literary community in Vancouver after three years, which, for a number of reasons both political and historical, is weirdly segmented in ways that I won’t go into here. My community here leans toward the academic, mostly because I’m tied to SFU for school and work, so I find myself hanging out with poets who are also attached to the institution – not only established poets like Jeff Derksen, Steve Collis, and Clint Burnham, but also my grad student poetry peers like Amy De’Ath, Natalie Knight, Joseph Giardini, Deanna Fong, and Chris Ewart (among a bunch of others), which doesn’t include the wider intellectual community I’m involved in. Outside the institution, my field of affinities is more scattered (though it includes a bunch of great, but very different folks like Daniel Zomparelli and Danielle LaFrance), since I don’t necessarily have time to commit to an ongoing organization, publication, or series.

As a result, my collaborations or curations that in Calgary might have been more explicitly literary are far more academic now. I’ve written or co-written a number of papers for academic journals, conferences, and community publications. I’ve collaborated on the organization of last 3 SFU grad conferences with a bunch of fantastic folks. Deanna Fong, Janey Dodd, and myself are updating the Fred Wah Digital Archive that Susan Rudy started at the University of Calgary. Even the humour anthology I did with Jonathan Ball has an academic edge. I find myself moving toward that Poet-Critic hybrid that maybe used to be more common or more recognized. Something like that.

As for MODL, the joke always was that the reason the name is spelled wrong is because it was never a model small press. I’m not ready to give it up quite yet, though I’m on a permanent enough hiatus that I put an end date on my cv. I’m hoping to get my shit together enough to finally finish the Meghan Doraty chapbook I promised to put out a couple years back (I’m sorry, Meghan!). That said, before I left Calgary, I threatened to sell off the press and its assets (a paper cutter and long-arm stapler) to anyone who might be interested for $50 and a flat of beer – if anyone’s interested, they know where to find me.

A: No one specific, I try to read a lot and from different sources – my reading habits are largely a matter of public record on Twitter. I gravitate mostly toward poetry, theory, blog posts, and reviews (but not book reviews). But, in the last few years, the most important text for me creatively has proven to be internet comments, the uglier the better. Don't let anyone suggest that you shouldn’t read them, even though, really, you shouldn’t.
Posted by rob mclennan at 10:13 AM