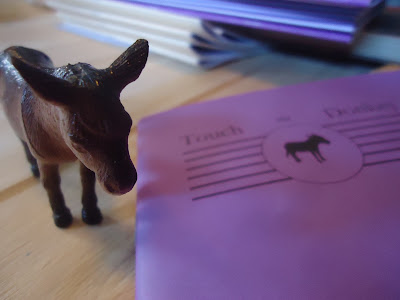 Laura Theobald is from in the Florida Keys and has lived various places in the South. Her poetry collections are What My Hair Says About You (Metatron, 2016) and Kokomo (forthcoming, Disorder Press) and the chapbooks Edna Poems (Lame House Press, 2016), The Best Thing Ever (Boost House, 2015), and Eraser Poems (H_NGM_N, 2014). She has an MFA in poetry from LSU, and designs books for BOAAT and OOMPH!. Her recent poems have appeared in The Wanderer, Hobart, Sink, The Atlas Review, Pinwheel, Witch Craft Mag, Everyday Genius, and Black Warrior Review, and the Anthology Women of Resistance (OR Books, 2018). Her website is lauratheobald.tumblr.com.

Two poems in her “Dear Birds,” series appear in the seventeenth issue of Touch the Donkey.

Q: Tell me about the “Dear Birds,” series.

A: They’re from a collection titled Imaginary Conversation in Which You Are a Flock of Birds. It’s about a specific loss, a death, other things, therapy—in this epistolary form. It’s about loving someone who is emotionally unavailable, and also physically unavailable. Someone who becomes abstract and unreal. The speaker also is sort of unreal. Which is a theme that’s a lot more present in my last book (What My Hair Says About You).

There was more reasoning behind it—something about how birds congregate and move as a mass. How they are individuals but also, like, a single observable phenomenon. Um. It’s about shared experience, about writing for an audience, about/to several people at once, confusing the subject. It has gotten some positive comments, but no publisher yet. I have already picked out a cover for it.

Q: Would you consider this work, then, an extension of your previous collection?

A: The tone and form are different, but I’m bound to notice my nuance more than others. There is less humor. There is a section specifically about death... Yes and no. It isn’t consciously an extension. It exists on its own. But it is still my voice talking about the same things I always want to talk about.

A: I think I’ll be working with a press to get my first book back into print. And then I have another full length coming out it looks like. Then there’s the collection that I’m looking for a publisher for. I’ll just keep writing and putting out books with whoever will have me. Maybe one day a bigger press will notice me. Maybe not. I keep writing, so that’s all that matters to me. Maybe the world will end soon and we won’t have to worry about any of it anymore.

Q: What writers or titles are in your head when you’re putting together a manuscript? Given this work-in-progress will end up being your third full-length title, how did you learn to put together book-length collections? Was it a process of trial-and-error, or were you influenced by any specific works?

A: Birds I began writing for my thesis in grad school a couple years ago now. I was really influenced by Claudia Rankine’s Don’t Let Me Be Lonely. That, to me, is like an untouchable text. I honestly can’t think of anyone else really in particular who I was reading really closely at the time. My peers in grad school were very encouraging. A few poets I really admire—Monica McClure, Natalie Eilbert, CA Conrad, Lara Glenum—have been encouraging.

I learned how to put books together kind of in grad school, because I had to, but also I had already put together three chapbooks and published one before I got to grad school (one never got published, which is good). I guess just by reading. That is probably the answer to most questions about writing. Like, you observe basically how it’s done. But I have usually been pretty lucky in having a clear sense of when a project is over, and where it should end.

Actually with Birds though it’s a harder time than with the others. Probably because of the way things happened in life, and the way things happen in life. Sometimes you’re just taken out of a certain generative space. Like, I don’t have the luxury of going away somewhere and and writing. So, you just wander out of a project, or something happens, and you have to figure out how to go and put the thing back together. Anyway I would prefer to just keep going.

Q: I’m curious: what was it about Rankine’s Don’t Let Me Be Lonely that resonated so deeply? How did that particular book assist in the poems that make up the manuscript of Birds?

A: It’s so personal, and personal in a way that matters to everyone. And “unflinching,” as they say. A poet looking hard at herself and at the world and making judgements. Speaking very confidently about scary subjects. In a way that makes you feel, like, safer and less alone. We’re indebted to her, and to writers like her, who put in so many extra hours to talk about hard stuff—and to make it appear beautiful, even the ugliest moments.

Rankine did an AMA one time, probably after Citizen, and I asked her something, like how she accounted for parts of the poems that were, you know, maybe embellished or even invented for effect, or for aesthetic reasons. That sounds like a rude question, and it is actually… I had something specific in mind at the time. Anyway, her response became a line in the book.

Q: Perhaps this relates, but what is it about the epistolary form that appeals? What do you feel you can explore or achieve through such that you might not be able to otherwise?

A: The form developed gradually over time. Maybe it’s not even a good idea. I remember while I was writing it, bringing versions to class, the form was changing, towards what it is now, and one of my peers got a little upset. She didn’t like the way the poems were changing. Maybe I should look into that. But I think the form helps make the poems seem more real. Like to make it an address—like there’s a real person here missing. I think it’s good for these poems to be more grounded in that way.

A: Chelsey Minnis, Jenny Zhang, Kate Greenstreet, Derrick Austin, Steve Roggenbuck, Kim Yideum, Jiyoon Lee are some poets/writers I am happy to return to again and again. A few recent favorite books are Why Did I Ever by Mary Robison, which I just realized, going back to it, must have informed the poems in this collection; In a Dream, I Dance by Myself, and I Collapse by Carolyn Zaikowski and Caca Dolce by Chelsea Martin.