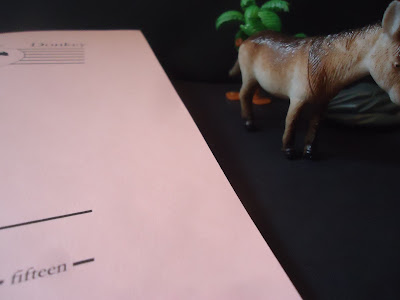 Michael e. Casteels is the author of The Last White House at the End of the Row of White Houses (Invisible Publishing). In 2012 he was nominated for the emerging artist award in The Premier’s Awards for Excellence in the Arts. He lives in Kingston, Ontario, where he runs Puddles of Sky Press.

His poems “Chapter 59 Preparedness, a Virtue,” “Chapter 60 The Giant Sloth,” “Chapter 61 A Quick Swig and A Small Bit” and “Chapter 62: The Long Ride” appear in the fifteenth issue of Touch the Donkey.

A: This series is taken from a larger project, a novel in which each chapter is a prose poem. The project began when a wrote a short series of 3 poems titled 3 Chapters Toward an Epic which was published by Pearl Pirie’s Phaphors Press. They are three very separate poems numbered Chapter 43, Chapter 109 and Chapter 159. I liked the idea that the reader would have to imagine what was happening between each of these poems, and how there was actually much more ‘white space’ to the piece than actual writing. But I then I too began wondering what was happening to my character in the in-between. When I started filling in the spaces I did it very unconsciously. I’d write a random chapter number and then write a poem beneath it. When the poem was finished I’d print it off and tuck it into a binder in order of chapter numbers. As the spaces between chapters began to get tighter I acquired a vague idea of what was going on. As you’ll notice with the four pieces included in Touch the Donkey, the chapters are often more connected by imagery rather than a linear narrative. Different themes (western, mystery, adventure, romance) weave throughout the book, with the main themes being uncertainty and discovery.

Q: How do these pieces fit in to the other work you’ve been doing lately?

A: I’ve actually found that this project has hijacked one of my writing voices. Anyone who’s read some of my previous work knows that I’m a big fan of the prose poem, and that most of my prose poems are surreal, first-person narratives. While this project has the themes I listed above running through it, there is also an element of randomness—a few pieces scattered throughout the book with very little tying them to the overall concept. Now when I’m writing a prose poem in a first-person voice I often find myself halfway through the piece wondering if it’ll work with my novel instead of allowing it to come together more unconsciously.

On the flip-side, this project has also pushed me to exercise my other voices, and my other styles of poetry. I’m working on a long poem in third person, lots of concrete/visual poems, some minimalist pieces, and the occasional verse piece. I find that if I keep working at all of my poetic outlets they help to inform one another and keep me from getting bored with any one style or voice.

Q: What first brought you to the prose poem?

A: I came to the prose poem very naturally. Most of my writing occurs in my journal in the form of stream-of-unconsciousness writing. When I'm writing like this I like to let my mind go blank, and write without thinking about what will come next. For me, line breaks often stall my lack-of-thought process, so most of my writing appears in the form of a long paragraph.

Many of my other poems lean to the other extreme, being highly coherent and narrative. The prose poem seems to house these types of pieces nicely, offering a framework for these micro-fictions to fit in.

A: For my first full-length collection, The Last White House at the End of the Row of White Houses the shift between chapbook and trade book came quite easily, thanks to my editor, Leigh Nash. I didn’t have a complete manuscript ready when Leigh approached me about publishing a book through Invisible. We made a plan. I put together all of the poems that I felt were strong pieces and sent them to her, and she made the initial selection. From there I re-worked some of my older pieces, and started writing new pieces that fit with the themes and ideas that were already present in the manuscript. We worked really well together.

My main unit of composition is still the chapbook. I think chapbooks are an ideal form for publishing poetry. Due to length restrictions, they limit you in one way, but they’re also something you could put together overnight if you wanted, so you’re free to publish anything you want. I work in so many different veins of poetry: lyrical, prose, visual, concrete, minimal etc. and chapbooks seem to house each style nicely.

However, after working on The Last White House... I’ve also started thinking in longer forms. My prose-poem-novel would be an example of this. I’m writing it with a book-length project in mind.

Q: Whom have your models been when putting together new work? What authors or works have shifted the ways in which you think about approaching your work?

A: While piecing the project together as a whole hasn’t necessarily been modeled after anyone else, there are poets whose work I keep returning to for inspiration/guidance/education.

One of the biggest influences on this current project is Ted Berrigan’s Clear the Range, a surreal meta-western that began as an erasure project from a pocket western by Max Brand. I’ve read both the source material and the resultant material and I feel like I’ve learned a lot from comparing the two. Many of the pieces in my current project started out as erasures, and I feel like I’ve learned some interesting techniques and moves that I’m able to utilize in my own poems.

My current project continues my explorations through prose poetry, and I’ve returned to some of my favorite prose poets for guidance: James Tate and Russell Edson primarily, but also Lisa Jarnot, Mark Strand, and some of the French surrealist poets.

A: My favorite experience while writing is surprise. I love when I’m working on a piece and I have no idea where it’s headed or, better yet, when my idea is totally off-mark, and the poem takes me some place entirely unexpected. Erasure almost always lends itself to this kind of writing. It’s a bit like collaborative writing, in that, the resultant poem is something neither of us could have come up with on our own, but in this case Louis L’Amour or Max Brand are, unknowingly, my collaborators.

The utilitarian in me also likes working with erasure because it’s a form of research. As much as I love writing in this surreal-western genre, I still haven’t banked enough of its vocabulary to write many of my own pieces yet. There are terms I’m still coming across and storing for later use, idioms that I’ve never heard before, types of dialogue that I’m filing away... lots of specifics, like names of guns, or kinds of horses, or rules for gambling games, or the many different ways to refer to the endless desert.

A: One of my all-time favorite books of poetry is The Collected Works of Billy the Kid by Michael Ondaatje. I’ve probably read it, in its entirety, a dozen or so times by now, and have read a few pieces upwards of twenty times.

Whenever I tire of writing I inevitably gravitate back to David McFadden. There’s something so personal, and seemingly simple about his work. It brings me back to when I was first discovering poetry, and it awakens a certain excitement in me.

But what I often find to be the most re-energizing is to find a writer I’ve never read before, or to find something new by someone I love. When I read great work for the first time it almost always pushes me to try something new and different with my own writing, setting me on a whole new trail through a mountain range I never even knew existed.