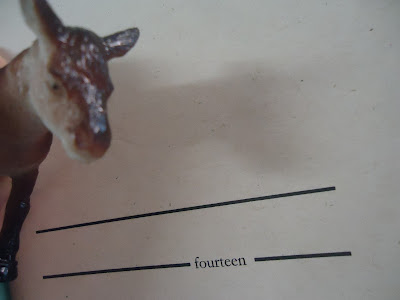 Cody-Rose Clevidence’s 1st book, BEAST FEAST, was released by Ahsahta Press in 2014. They live in the Arkansas Ozarks w their dog, Pearl.

Their poem, “[Nope],” “from Poppycock & Assphodel,” appears in the fourteenth issue of Touch the Donkey.

A: hahaha no way

Q: Are you willing to talk about the larger project it is part of, “Poppycock & Assphodel”?

A: .... yes..... but, I do t know how to not be cryptic.  I’ve never been a fan of the personal lyric, I mean, if it sounds good, okay, but like, it just has always seemed to me to be a narcissistic waste of space, like the whole world and all of history and all the ideas and struggles and everything is going on around us, anyway so I hate myself for this project, and also I’m a lil prude and have always been quite private in my own self, so fuck me, here I am, out of a shit relationship that made me feel like I was starving to death, trapped in some medieval torture device, & then I’m out of it and... it was like coming back to life all of a sudden the world around me and the colors and the sensations of being were so... I don’t know so real and full of life instead of this bleak and endless pain, and well also uhm I sort of accidentally was also falling in love, w someone I wasn’t rly sposst to be but it just happens, I guess.  anyway lots of things... &maybe we can just say there's a long tradition of queer poets coalescing sexuality w/th experience of nature, or something.  Or any poets but I think queer poets especially because of... well that’s a whole other thought...Anyway so its a fucking personal lyric and I hate myself because there are really important things in this world that are way more interesting and way more pressing, but well I’m stuck here rn so.

Q: How does the work in “Poppycock & Assphodel” compare to, say, the work in BEAST FEAST?

A: Well.... it’s very different... but what happened was this.  After BF I wrote this long, v dense manuscript called FLUNG THROWN &... well I had just read John McPhee’s “Annals of a Former World” and was obsessed with the evolution of early life on earth, & flung. thrown... like I said super dense & well it felt v serious, something about the evolution of consciousness, to feel grief, my friend Amelia Jackie, The Molasses Gospel, has a line “All the pain is worth it/ all the pain is worth it/ just to have one minute/ alive”... & I was like... uhm really cuz... no.  & just something about the vastness of geologic time & to be conscious in whatever way we, as humans, are, in our human consciousness experiencing this tiny sliver of our experienceable world, for like, what, a blip in time, anyway, and also to be honest I got deep into prosody & was just rereading Hopkins, H.D. & Brathwaite, like, trying to learn, on some intimate level, their respective genius’ w regard to, like, how sonic & prosody & meaning can get wove together, anyway, like I said, it’s DENSE (I was also obsessed w this idea that like, if a book of poetry is 18$ dollars, it should... I dunno take more than 20 minutes to read, or like, I wanted, needed, to write something that felt heavy.  so Poppycock & Assphodel became sort of a minimalist jokey slough-off of shit that was too silly to get put in Flung/Thrown, sort of like a catch-all manuscript for one liner's & dick jokes, to like, shake the density out of me.  formally it’s very loose, but where BEAST FEAST isn’t as tight as I’d like it to be, in retrospect, in p&A the looseness was a foundational necessity, like, I had to walk it out or shake it off after the rigor I tried to put into F/Th. and then like I said it’s a totally narcissistic personal lyric, the scope is v close n small, somewhere between my eyeballs & th world, the lines are mostly short & turn v fast, the rhymes are goofy, & like it doesn’t have a bigger philosophical project that underlies it like both BF & F/Th (tried to) do.

Q: How do you feel your work has progressed over the past few years, through BEAST FEAST and beyond? Where do you see your work headed?

A: I don’t know. Not linearly or “progressed.” More like being first possessed in one direction and then another & not knowing which direction next, & more at the whim of it than I used to be, or at the whim of not-it, of not writing, also. I have a project I don’t know how to write, that occupies some of my brain, that I don’t want to talk about because I haven’t even figured out how to think about it, but mostly I feel helpless w language. More than before.

Q: What authors or works have helped influence the ways in which you write, and subsequently put books together?

Q: When you say you feel helpless with language, is this a normal element in attempting to put a book together? How do you work through it?

A: I guess to be the most honest, I just find myself rereading those same people over and over. and also sometimes Dickenson, but then I gotta wait a while to clear her out or else I'm just writing Dickenson-wanna-be poems, her prosody's so forceful it sticks in my head. And I reread Tim Early’s Poems Descriptive of Rural Life and Scenery sometimes, to be reminded that there can be energy & like, fun, or some sort of vitality in poems & I reread Lance Phillips to sort of shock myself out of, like, being bogged down in some way, either syntactically or with regards to... some sort of structure of meaning in the content, like, when I'm feeling stifled by ways of making meaning that feel dull or that like, dull my senses. But mostly I read science books cuz the worlds so cool & weird. or like, if I'm interested in the world then I'll be interested in writing... maybe... sometimes.... mostly.