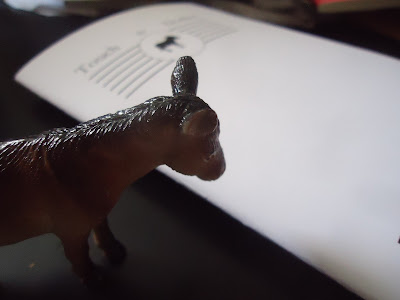 Oliver Cusimano’s writing from an hour before his bedtime, in the basement where he’s lived the last two years, with his things.

His poem “Sautéed” appears in the thirteenth issue of Touch the Donkey.

Q: Tell me about the poem “Sautéed.”

A: “Sautéed” is the last poem in an invention I began about three years before. It could be because I grew up more in movies than books, but, however, I’d been frustrated with how little I could thicken my writing’s texture. As though nothing I’d written could tolerate a re-reading. The invention: I’d weave three strands of text into the same letters. They are... (1) My vocabulary limited to words drawn from a source text.  So that text’s sound shakes mine. (2) The sequential words of my text. And (3) at least one letter of each of those words is displaced onto its horizontally parallel line. Read these displaced letters sequentially, and they spell a message. At first these messages were quotations from books. Once I became serious, I started a series: words from Jack Spicer’s Language, and displaced letters to spell the names of doughnuts or coffees or coffee shops. Four more of these series, until, just before leaving the invention for something else, I made a few kitchen recipes. The four poems of “Sautéed” store ingredients and equipment for making sautéed onions: “Gallo olive oil,” “T-Fal frying pan,” “Seven white onions,” and “Simply Bamboo cutting board.” That’s a gist of the formal definition.

Making the poems was just a matter of setting a date with the materials. There, then, I wouldn’t make simply whatever, but whatever I wanted. It was a way I had some time ago to query what I wanted. “Sautéed” is a record of its passage one certain night. ...The hope: the invention’s intersections, most basically, the horizontal of my desire and the vertical of the form, would witness something that could tolerate re-reading...

Q: How does this differ from some of the other work you’ve been producing lately?

A: I turned the page.  For the last eight or so months I’ve been writing something now titled CRITTERCISM. It began with an intention to write a mirror book to Stanley Cavell’s Pursuits of Happiness – an essay addressed to each of the seven Hollywood Comedies of Remarriage. That explicit content has been completely effaced, although recently rereading parts of Shakespeare’s A Winter’s Tale has helped me to take another step (Cavell chooses it as offering early insight into the remarriage genre). But my growing thing’s vocabulary’s now mostly elsewhere: mammals and feathered dinosaurs; critters and bodies of light/late; rivers and rivals; to spore, score, and pour; arrows and eros; veer/steer, career, queer, near & dear; the para-bolic, sym-bolic, meta-bolic, hyper-bolic, dia-bolic; stupidity, idiots, dummies, being stupefied; the templum and the pro-fane; considerate contemplation and dis-aster...  If the poems were duende-work, this thing’s with an angel…

Q: You’re currently a member of the bpNichol Lane writers’ group. How did you first get involved, and how do you feel it has shifted the way you see your writing, if at all?

A: The writing group has disbanded, although many friendships from then continue, and continue to lead my way in writing and reading. I was first invited to the meetings by Michael Boughn, after being a student in one of his classes, “Contemporary Poetry,” summer 2011. It’s profoundly shifted my relation to writing. Maybe most basically, it exposed me to the experience of readers. I mean, some of the others would hear in whatever text I brought that night to share lines of sense I hadn’t intended, or detected, or meant, or thought could be meant. That’s dynamite. Who knows what it’s done, but because you asked, I’ll say, it shifted where I’d imaginatively located the field of writing and has accelerated my complication of its materials.

Q: What writers and/or works have influenced the ways in which you approach writing?

A: Most significantly, friends in Toronto. Some I first met at the bpNichol thing. Some from U of T classes I’ve audited. Some from neither of those places.

Q: You’ve published at least one chapbook so far. Are you thinking much about larger groupings of poems as you write? Might there be further chapbooks, or even something larger?

A: The thought of gathering poems from the invention I've already mentioned to as much as a book has been in mind, and if I did, Swimmer's Group would publish it, a marvelous small printing/publishing company in Toronto.  I seriously recommend whoever reads this to look them up.  But at least for now a book of the poems exists only in the thin conditional spheres.  My energy to do with writing in the last few months has concentrated on the work now underhand, CRITTERCISM...

A: Emerson and Thoreau again and again. And there are friends in Toronto – I leave our conversations energized. Thanks, rob.