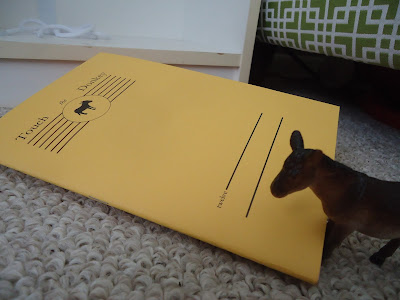 Sarah Swan is from Winnipeg, but currently lives in Yellowknife, NWT. She is a former medic with the Canadian Armed Forces, a homeschooling mom, and a freelance fine arts writer. Her publication credits include the Winnipeg Free Press, Canadian Art, Galleries West, Studio Magazine, and Macleans’ Magazine. At one time, Sarah was also a poet, having published a book of poems titled Rapture Red and Smoke Grey with Turnstone Press in 2001. A chapbook, Domestica, is newly out from above/ground press. She is happy, and relieved, to be writing poetry again.

Four poems from “Domestica” appear in the twelfth issue of Touch the Donkey.

Q: Tell me about the four poems from “Domestica.”

A: The short answer is that these poems are about thinking. I’m a stay at home mom, and so lately my poems contain a strange mixture of thoughts about art, philosophy, my family, my home, and grocery lists. I think they are also about anxiety, and about the tremendous ups and downs of our inner lives. We live in a very anxious age. I read the novel Laurus recently, by Vodolazkin, and one of the characters is constantly writing on scraps of paper. For him, says the book, “the written word seemed to regulate the world. Stop its fluctuations.” I can really relate. And, the cleaner, more spare, and more exacting I can make a poem, the more stable I feel.

Q: How do these poems fit in with the rest of the work you’ve been doing lately?

A: For the past 5 years I’ve been writing about visual art for various publications, reviewing art shows etc. I love thinking about art, how it is made, what it communicates etc. In a way, I feel like many of the poems contain sentiments you’re not really allowed to include in a proper art review – things that are more personal than most professional art journalism allows. Art, you know, has a way of meshing with your everyday life, and with your personhood, if you let it. Though I’d love to write an article titled “How the Paintings of Neil Farber Affect the Psychology of a Stay at Home Mom,” in which I’d compare his crowded canvasses to my own too-cramped mind, I’m not sure who would publish it.

A: I wrote poetry over the years, but in stops and starts. But it isn’t very good. Somehow I lost my confidence. And then I had children. Babies and young children really do a number on the privacy and solitude needed for creative work. In the early years I really struggled with this. I missed being ‘deep in the machinery of my wits’ as Mary Oliver put it once. I couldn’t seem to find my way back to productive writing. Now that my kids are a little older it is certainly easier. What brought me back? I suppose the art writing. To the chagrin of a few editors, I was getting a little too wordy in my articles. I was using a ridiculous number of adjectives. Slowly it dawned on me that I needed to write poetry again. Also, a few encouraging people (like you, Rob!) really gave me the push I needed.

Q: Well, it did take me over a decade to figure out where you were, given your name change. Given the distance between publishing, what do you see as the differences between your work now and your work then? How do you feel your writing has developed?

A: Ha! Well, I moved a lot too! I’m really not sure if my writing has developed in any significant way. I feel like I’m starting again, from square one, and have to learn as I go. I suppose I’m more interested in brevity and conciseness now. Over the years I keep returning to William Carlos Williams, trying to figure out how he creates imagery with so few words.

Q: One thing I found quite striking about your book, Rapture Red and Smoke Grey, was the ways in which poems were grouped, whether as extended suites or sequences. The poems in Domestica (above/ground press, 2017), from whence the poems in this new issue have come, also seem to be loosely grouped. Do poems come to you in loose groups that form as you write? How do your poems begin?

A: Little phrases or word parings start rattling around in my head, and when I finally sit down and commit them to the page, the poem begins. Like many writers, I follow the words. Words are really unpredictable sometimes, and I love that. I write to figure out how I feel or what I think. I never know ahead of time. And yes, the poems sometimes arrive together. I guess I’m trying to work something out when this happens.

Q: When I first read your Rapture Red and Smoke Grey I saw something familiar there in the way long poems are constructed in the prairies, akin to works by Dennis Cooley, for example. What influences and/or authors led you to build poems and groupings of poems in the ways you do? What works have influenced the ways in which you write?

A: Dennis Cooley was a prof of mine. He was a godsend. He was really critical of my work, but was very kind about it. And he really helped in getting the work published. Of course I learned all about the prairie poets when I was a student. But, I remember being more affected by Winnipeg poet Catherine Hunter in those days, and George Amabile. Long time influences include Anne Carson, Annie Dillard, Marilyn Robinson. Those last two are novelists and essayists of course, but it is their turns of phrase, pace, and rhythm I so admire. They both have a voice that emanates a calm, quiet sanity. And they can both use language in wonderfully surprising ways. I’ve already mentioned Williams. And lately I’ve been revisiting Robert Bly – “My heart is a calm potato by day, and a weeping/ Abandoned woman by night. Friend, tell me what to do,/ Since I am a man in love with the setting stars.”

A: Particular works: Holy The Firm and The Writing Life, both by Annie Dillard. Beauty of the Husband, by Anne Carson (best really long poem ever!). Also, I could listen again and again to Dear Heather by Leonard Cohen, and I read the Puritan prayer book when I feel especially low. Say what you will about the Puritans, but they had such a rich vocabulary! For the past few years though, I have really been reenergized by minimalist paintings and by the still life paintings of Georgio Morandi. His limited palette is so comforting, somehow. It’s therapy. And writing, for me, is therapy too.