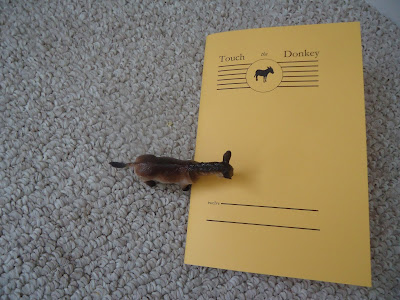 Kate Hargreaves is a writer, book designer, and roller derby skater who makes lattes on the side. Her most recent book is the poetry collection Leak (BookThug, 2014), and her writing has appeared in journals across Canada and the U.S. She lives in Windsor, Ontario with her boyfriend and their black cat Winn. Find her online at CorusKate.com, @PainEyre on Twitter and @CorusKateDesign on Instagram.

Her poems “removal of splints following septoplasty,” “Backspace” and “taco baby” appear in the twelfth issue of Touch the Donkey.

Q: Tell me about the poems “removal of splints following septoplasty,” “Backspace” and “taco baby.”

A: I’ve always had a fascination with the human body, especially when it is making itself known by being uncomfortable or a little bit gross. I had a septoplasty a couple years back, and having never been that aware of the state of my nose, I was suddenly unable to become unaware of it. I couldn’t breathe at all, I had plastic tubing sewed into my nostrils plugged up with dried blood, and this went on for two weeks. When they came out, I imagined that there had been far more than just medical grade silicone and a few stitches up there.

“Backspace” was written in a bit of frustration as, coming out of grad school where part of my job was to write, and being out of academia, working 40+ hours a week, with no one forcing me to write, I found that there just wasn’t enough time in the day to get any writing done. When I finished work, I was too mentally exhausted to get anything creative accomplished, and writing became part of the list of chores that were piling up.

“taco baby” came out as a bit of a strange tangent while thinking about the vast expanses of suburban grocery store parking lots. I like playing with the domestic and the mundane and making them a bit more surreal and visceral, so when I had this vague idea of a hot cement parking lot soaking up the heat and this person sort of trapped within it, the poem sort of spun out from there.

Q: How do these poems fit with the other work you’ve been doing lately?

A: The poems are quite a bit different from what I am working on lately in terms of form, because I am currently writing a collection of short fiction. In terms of content, though, they echo one another. There is a definite sense of an over-consciousness of the body in the fiction I am writing, as well as sort of magic realist moments where it is unclear whether something strange is happening or being imagined.

Q: I’m curious about the echo, as you say, between the poems and your current fiction-in-progress. How might the current work relate to the work in Leak, or even Talking Derby: A Life on Eight Wheels (Black Moss, 2014)?

A: The current project doesn’t have a tonne to do with Talking Derby, in terms of its subject matter besides that fixation on bodies and bruises and injuries, etc. However, the writing style does in some ways echo the way in which Talking Derby used some tactics I use in my poetry and transplanted them to fiction. I write my fiction with a pretty loose grammar that is more coloured by the actions or feelings of the speakers, so sometimes it reads more like poetry.

I see the new fiction collection as a bit of an extension of Leak as the main character has a lot in common with the speaker(s) in Leak. She’s neurotic, dealing with discomfort in her own skin, behaving erratically. I’ve sort of taken the voice from Leak and made her into a more fully formed character with a name and a story.

Q: With two published books to date, as well as your current works-in-progress, how do you feel your work has developed? Where do you see yourself headed?

A: Really at this point I am just happy to be writing anything again. I had a few years during which I really struggled to get any writing done at all because I was so creatively and mentally exhausted from working full time on other people’s books. It took me a little while to recharge and reapproach my own writing and I think in the process it has definitely changed. I’m still interested in language play but I’m having fun with narrative a bit more now as well. Going forward I would like to see the fiction I’m writing become a book-length manuscript. I’m also interested in exploring some different ideas in poetry so I still write a bit of that on the side but the fiction is the bulk of my writing at the moment. I’m trying to get to a point where I can make more time for writing between my design work and my part time job, but the logistics are tricky.

Q: Given that composing poems are currently secondary to your fiction work-in-project, are you aware of any specific project evolving, or are you working instead on a series of occasionals that have yet to shape themselves? Is the fiction prompting the occasional poem, or is the poetry forcing your attention?

A: The poems are not really one project at the moment. I was working initially with the idea of exploring exercise and fitness and the ways we talk about these things, but the poems I have been writing haven’t all been part of that train of thought. Sometimes I will have an idea that I think will work for the fiction project and for whatever reason when I sit down to write through it, it ends up being a poem, and that’s alright with me.

Q: What writers or books are in the back of your head when you’re putting together a poetry manuscript, or even an individual poem?

A: Because of the great professors I had at university when I was doing my BA and MA in creative writing, including writing Leak, I tend to always consider what Susan Holbrook and Nicole Markotić would say about something I’m writing. They are both writers whose work I admire, as well as wonderful editors with very keen eyes for detail, so I tend to think if I would be embarrassed to show a piece to them that it likely needs more work before it sees the light of day.

A: I have read Miranda July’s No One Belongs Here More Than You over and over in the past few years, and am thinking about it a little differently now that I am writing fiction. I also return a lot to Ariana Reines’ Mercury, especially when I feel like my writing is getting murky and I need some influence in terms of making it more direct and concise.