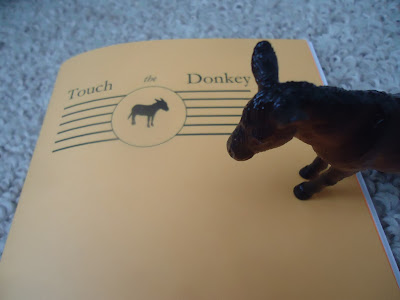 Kate Greenstreet’s new book The End of Something is forthcoming from Ahsahta Press in 2017. Her previous books are Young Tambling, The Last 4 Things, and case sensitive, also with Ahsahta.

Her poems “CARDBOARD STAR,” “IS THIS FOR ME?,” “HE WAS A BOY ONCE,” “IN A HOUSE OF MARKS,” “HORIZON MOTEL” appear in the twelfth issue of Touch the Donkey.

A: These poems are from a manuscript called The End of Something, scheduled to come out in May from Ahsahta Press. I see this book as the conclusion to my previous three.

Q: How do you see the current project as a conclusion? And a conclusion to what, precisely?

A: The new manuscript is actually the center of a bigger project that includes art, video, and audio experiments, based on The End of Something and offering alternate ways into it. That will all be accessible from a site (theendofsomething.com), which will go up when the book is published.

After I finished case sensitive, when I was writing The Last 4 Things and then Young Tambling, I didn’t think of the books as parts of a set or some kind of continuing inquiry. But while working on this one, I began to realize that my books are interconnected, and to feel I was putting down a fourth corner to define a formerly open-ended space.

Although I see The End of Something as a conclusion, I also like the idea that a reader could start there and go to case sensitive next. Or to either of the others. The books seem to belong to each other in a new way, so that any one of them might be the beginning or the end of a cycle that now feels complete.

Q: The curious thing about all of your writing to date being part of a single project: what might come next? Do you see yourself writing something beyond this collection, or might you simply move onto other things?

A: I want to bring poetry into the other things I do, more than I have already. And I want to find out what else I can make with language. I’m not exactly writing at the moment. But I have the habit of writing things down. Jean Valentine said to me once: “We’re always reading, and we’re always writing, even when we think we’re not.” At lunch yesterday, I started reading Fanny Howe’s poem “Loneliness” to Max. Do you know it? It’s a wonderfully matter-of-fact poem, unsentimental, but my voice cracked at “And you climb the stairs obediently” and I had to stop for a minute. In the pause, Max said: “Mid-poem, she began to weep. The audience became restless.” That made me laugh, and I wrote it down. I don’t have the temperament to keep a diary, but I don’t think I could break the habit of writing things down for no reason. Or I wouldn’t want to. So that’s the present. About the future: there are other kinds of books I want to make, different from the books I’ve made so far. I have ideas. But I know from experience that those ideas will not lead me where I think I want to go.

Q: With four trade books over the past decade-plus, how do you feel your work has developed? Where do you see your work headed?

A: I’ve become a somewhat different person in the past ten years, but my methods haven’t changed. Say a farmer calls a dowser on the phone. She drives over and gets out of her truck. She might have a special little branch with her or pick one up off the ground. She walks out to where the water needs to be. Maybe it’s there, maybe it isn’t. My writing has developed in more-or-less this same way. Walking around with a stick until I feel a pull, one field after another.

Q: I get the sense that your books are pieced together as a kind of slowly constructed collage. How do your books get built, and how did this develop?

A: Well, if you found yourself in a room where there were hundreds of photographs on the floor and seven taped to the wall, you might notice a common element, maybe a subtle element, in the taped-up photos. Looking down at the floor, you see another photograph that seems to belong to the set of seven. Luckily there is also a tape dispenser on the floor, so you tape that eighth photo to the wall. At this point, you might feel the urge to rearrange them. They’re not your pictures! But no one else is around, so you go ahead and move the fourth one to the first position. You’re “reading” the photos from left to right, as we do in English. Something’s missing—there’s that empty space, but it’s more than that. You get down on the floor. You begin to select certain pictures and put them in a pile. Soon you have two small piles. Off to one side, you spread those out. You put one of the pictures from the first pile into the second pile. You put two of the pictures from the second pile into the first pile. You realize that you need to start a third pile. Okay. Now you can put some of the pictures from each pile onto the wall. One seems perfect for the empty space. But as soon as you’ve taped that up, the last photo feels wrong. You take it down and lay it on top of the third pile. You try a photo from the second pile for that end spot and it’s good there, but asks for clarification. You’re constructing a kind of a narrative from these pictures. You know you will understand what you’re doing when the arrangement is right. It’s not about chronology, it’s about meaning. You’re not trying to tell a story, you’re trying to find the story. There are still hundreds of photos to go through! The answer is in there somewhere.

It’s like that. But instead of pictures, you’re working with pieces of language. Phrases, sentences, paragraphs. So you’re looking but also listening. And speaking. Where do these language fragments come from? Like the photographs on the floor, who knows? They come from anywhere. Words you woke up with in the middle of the night, old notebooks, what your neighbor told you on the stairs. You say a phrase out loud and join it to another, then add a sentence that comes to you in the moment, which reminds you of—but you don’t want to go there. Although later you might talk with a friend about that memory and find a chunk of your conversation useable.

The process goes on and on this way until you finally find the sound and the order you’re seeking—the best you can do. Then you change it four more times, write a whole new poem from nowhere, and even though you’ve used the word “something” a hundred times, you’re done.

Q: What influences, do you think, helped bring you to this point? And when you say you want to “bring poetry into the other things” that you do, what are some of these other things and how have you managed to keep them separate so far?

A: I’ve been working with visual art, sound, video, and text for quite a while. It’s funny to think of someone trying to keep all these things separate—I haven’t, but at this point I’m more actively looking for ways to combine them. It’s exciting that so many artists work in multiple disciplines now. That’s probably the main outside influence on my current thinking.

A: My needs vary. In the past few days, I’ve returned in a big way to Immanent Visitor: Selected Poems of Jaime Saenz, which I first read while writing case sensitive. It was important to me then and I often come back to it. I don’t read Spanish, so the English translations by Kent Johnson and Forrest Gander are the poems I know, poems I especially love to read aloud. Gander and Johnson also translated The Night, Saenz’s final work, and I just reread their introduction—an enlightening and entertaining essay about the author and about some experiences the translators had in La Paz, his home city. Both books include wonderful photos of Saenz—not incidental to me, as they heighten my impression that I know this guy, from the old land (and I don’t mean Bolivia).

Brief stanza from a poem in Immanent Visitor: “Contemplating the bones on the plank, numbering the darknesses with my fingers starting from you. / Seeing that things are, I fill with desire. / And I find myself crossing a great distance.”