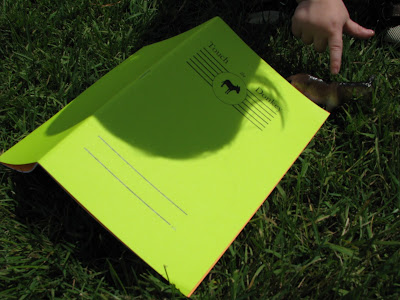 Kayla Czaga is the author of For Your Safety Please Hold On (Nightwood Editions, 2014), which was nominated for the Dorothy Livesay Poetry Prize and a Canadian Authors Association Literary Award, and won the Gerald Lampert Memorial Award. Her chapbook, Enemy of the People, is forthcoming in fall 2015 from Toronto’s ANSTRUTHER PRESS. She lives in Vancouver.

A: These poems are from a series of snapshots of the life of a semi-fictive man named Alexy and his family in Soviet Union. The Five Year Plans is told in third person, but home is told from his POV. My goal was to tackle historical fiction in poetry, using form as a way to capture State Procedure (and oppression) and the ways that citizens submitted and rebelled to it. People were being erased during the Five Year Plans and self-erasure seemed to capture that better than straight-forward narrative poetry. In Home, I wanted to explore Alexy's own potential thoughts, wrestling with the state-answers, so I chose a longer-lined lyric.

Q: I’m curious as to why you chose poetry as the form in which to explore, as you say, “historical fiction.” Why not utilize fiction itself, or even non-fiction? What do you feel the form of poetry allows you that other forms wouldn’t?

A: The short answer would be that I am primarily a poet, so it’s the genre that comes most naturally to me. A longer answer would be that, at the time of I started writing Enemy of the People (my Soviet book), I was really into Anne Carson’s Autobiography of Red. I had never seen a book-length narrative poem before (besides, I suppose, Beowulf) and it really excited me, so I began with that in mind. The deeper I got into the project, the more poetry seemed to suit the various contents—the repetition and doublespeak of propaganda, the lyric narratives shattered and rehashed by the state, the wild avant garde cubist and futurist arts. Poetry allowed me to speak in many different ways, with various lenses, about the same subject.

Q: How does this compare to the other work you’ve been producing, such as For Your Safety Please Hold On?

A: It’s really difficult to answer the question, “how is this project different from your other project.” They felt the same to write. There was the same urgency to “get it down/record it.” The language arrived in the same sort of way as with FYSPHO. I see the same preoccupation with family and group hierarchies in both projects. I think ENEMY OF THE PEOPLE pushed me towards using different forms and modes more often. Because I was trying to capture a whole time period—daily life, architecture, media, politics, music and film, etc.—I almost had to invent a new form for every poem I wrote, from self-erasure to list to found to trying to replicate Shostakovitch’s rhythms in words. I guess, in a general way, FYSPHO felt more personally challenging, while ENEMY OF THE PEOPLE stretched my technical muscles.

Q: The idea of “getting it down” is a prevalent one. Where does this urgency come from, and who have your models been for attempting to record historical information in such a way?

A: One of my very first poetry professors, Tim Lilburn, talked a lot about the “urgency” of a poem. Basically, he meant that the reader could sense the writer’s excitement and investment in the poem/project. He really encouraged me to probe down deep into the dark and violent heart of the Soviet Union, to submerge myself. I think that’s how he operates too, with that sort of deep immersion. I basically ate, drank, and lived Soviet documents until that’s all that was coming out of me. Other writers I admire who tackle history: Anne Carson, Kevin Young, Ilya Kaminsky (more personal history in his case, mixed with Ukraine’s).

Q: I suppose the real question is: what drove you to explore this particular expanse of history? What was it that drove you to compose poems about “the dark and violent heart of the Soviet Union” of the 1930s?

A: Why do we like what we like? I don’t know. Steven Price once told me that I needed to discover why I was writing about the Soviet Union or the project would not sustain my attention, or it would become too expansive and lack a focal point. It does feel too expansive, he’s right, but I haven’t lost my fascination. I think any attempt to pin down the “why” would be a bit reductive. The project is a dear friend to me. We’ve known each other a long time. I could describe her personality, but that wouldn’t really tell you why we spark together. I will give you one reason, but it is not the complete reason.

The project began with a photograph, a very famous photograph of Stalin on a bridge that Nikolai Yezhov had been deleted from after his unpersoning. So, I wrote a poem about this photo and I began to research more about the period. Gaps in reality is a big focus of the project—propaganda, altered censuses, public lies. I am very interested in how Stalin could say, “life is getting better…more fun” during his great purges. I am interested in the fabrication of history and how it bumps up against the lives of ordinary citizens. The second section of my chapbook deals primarily with documents and politics.

In the first section, I created a Soviet family out of the myth of Alexy Stakhanov—a miner who was reported to have mined an improbable amount of coal. Various towns built monuments to him, were named after him, drank to him. Under all that mythology was a regular, maybe slightly stronger, guy who was living an actual life somewhere. I spent several poems wondering who this guy was, who his family was, how many of his family members were unpeopled. He also became kind of an everyman figure--there was a whole Stakhanovite movement, so the poems are not exclusively about him, but about all of the Alexys.

The chapbook coming out in the fall is just a sampling of where this project is going. It is still very much in progress.

Q: Where do you feel your work might be headed?

A: To a less manicured place, maybe. I just graduated my MFA last month and I have no plans of enrolling in further writing classes, so this will be the first time I don’t have a group of readers underlining things they don’t like in my poems and telling me why they stink. Of course, I have a couple of close first-readers who will keep helping me, but I think my work will get a bit freer outside of the academy. I hope to be less concerned with what my advisors and peers are looking for.

A: Whenever I verge on taking the whole thing too seriously, I read some of Russell Edson’s prose poems. A few other favs (i.e.: people whose books don’t stay on the shelf very long): Anne Carson, Ilya Kaminsky, Sylvia Legris, Matthew Zapruder. Also, every few months I re-read Ulysses by Tennyson (embarrassing, I know).
Posted by rob mclennan at 9:47 AM