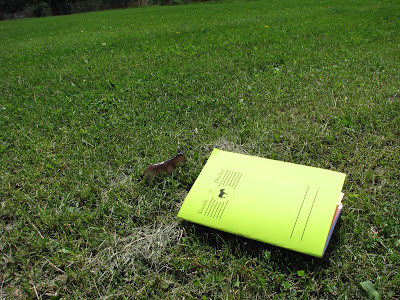 Aaron Tucker’s first full collection of poetry, punchlines, was published by Mansfield Press in Spring 2015. Additionally, he is one of the co-creators of the ChessBard (chesspoetry.com), an app that that translates chess games into poems. His collection of essays Interfacing with the Internet in Popular Cinema was published by Palgrave-Macmillan in July of 2014. By day, he is a professor in the English department at Ryerson University where he is currently teaching essay writing and digital literacy to first year students; by night, he is working on learning chess in between watching his beloved Raptors lose games. You can reach him atucker[at]ryerson[dot]ca.

Three poems from “ChessBard” appear in the sixth issue of Touch the Donkey.

Q: Tell me about the “ChessBard” project, and, specifically, the three poems from such that appear in this issue.

A: I have been taken chess lessons for the past two and a half years after not playing the game much since high school. When I came back to it and started reading some of the beautiful chess books of Capablanca, started immersing myself in the unique language of chess notation and variation, my brain started to overlap that with the aspects of poetry that send my brain buzzing (full poetics statement: http://chesspoetry.com/poetics/). So it began as a thought experiment – how might I translate a bunch of chess movements into relatively stable poems. After I put the call out to Craigslist and found my co-creator Jody Miller, we worked for a number of months through various iterations of the machine (http://chesspoetry.com/about/archives/) until we finally, at the end of September 2014 had a translator we were happy with (http://chesspoetry.com/translate/) and a playable version (http://chesspoetry.com/play/).

The three poems included are games I played on chess.com then translated through the ChessBard. Even after all the time and energy I've put into learning chess, I’m not very good at it (I lost two of the three games) but I appreciated how I was writing with the other players in a strange hyper collaborative virtual space, not against or separate from those players. Too, there is a certain silliness or whimsy built into the project that starts getting reflected, I think, in the poems themselves (“the fortune-teller, fork upon beef/tensely beaches move and human”) that I really enjoy.

Q: What is it about the “baffle” (as George Bowering calls it) that appeals, and how does this differ from the work you’ve done prior?

A: The “baffle” as a self imposed constraint is something I’ve personally rarely utilized in my own prior poetry – in fact, when I was young and foolish, I used to bristle at writing sonnets and villanelles and the such, viewing poetic rules as arbitrary and immediately restrictive. Of course, I’m older and wiser now and had wiser people recommend sonnets and villanelles and the such that I now really adore.

It is strange though that well before working on the ChessBard, as a child onward, I’ve always loved games and sports specifically because appreciating and playing required learning and then stretching rules. The ChessBard also scratches that specific itch, especially when combined with the very rule focused code and mark-up that the website depends on. If you don’t talk with the exact language in an exact order, a webpage simply doesn’t display, an app doesn't work; there is no room for ambiguity. There is something deeply satisfying about talking to a machine in the exact way it understands, within its extremely precise rules, and having it manifest, in this case as a webpage, then a poetry writing machine. Yet, that satisfaction I found in the ChessBard ran right alongside the satisfaction I got from creating the strict language templates that then underwrite the poems – there was the same joy in figuring out the specific verb tense we needed to settle on, how a conjunction worked (or, more often, didn’t work) with certain other components of a sentence. While some might look at this as some attempt at mastery, to know all the rules, I look at it with the same view as I look at playing chess or basketball – as play.

Q: How important do you regard play in the compositional process?

A: Extremely important! I’ve written about the initial role that my favourite poets and games had in the project in the poetics statement on the text (http://chesspoetry.com/poetics/) so I’ll take a slightly different path through this question that I have before, so as not to repeat.

There were two events that, looking back, shaped my involvement in the project. The first was reading Masters of Doom, a book detailing the early history of id and the building of the video game Doom. I’ve always loved and played video games and so the history alone was fascinating. However, I was particularly struck by John Carmack as a figure. He’s a true delight to follow on Twitter, all sorts of high end coding craziness/jargon (“With all the heterogenous processors and memory spaces in a SoC, modern mobile architectures look rather like the much maligned Sega Saturn.”) and his plan archive (http://floodyberry.com/carmack/plan.html) is a collection of super fascinating details and debugs. But what jumped out of the book was how intricate and meticulous he was in creating a space for play – how he understood that play is a very simple thing (Huizinga’s “magic circle”) and also a delicate and dense space, especially virtually. While the ChessBard is nowhere near as sophisticated, I remember reading the book and thinking about the layers of play (the player running/shooting; the mini-goals of each level; the narrative of the story; later, play online between others) and the layers of language and rules in a video game and wanted to start to replicate some of that in a poetry project. So the ChessBard has that – players playing chess while also mucking around in poetry as they do so, all within the rules and languages that are required of a website and app working in harmony.

The second landmark was the Digital Humanities Summer Institute that I attended in June of 2014, where I took the “Games for Digital Humanists” workshop (and written about briefly here: http://chesspoetry.com/playingwriting/jody-miller-aaron-tucker/). Andy Keenan and Matt Bouchard led the discussion with some great readings, but then we also went to the computer lab and played a bunch of video games before designing some of our own boardgames. It was this sort of hands-on approach, dovetailing with Carmack, that I found really rewarding – that playing means actually playing! And that there is a required physical and mental interaction that can’t simply be theorized, only undertaken. I love that about the ChessBard – that it must be played in order to write and that that play is symbiotic and interdependent. You can not play chess on your own; every move depends on the move before (and the move after) and the moves of the other player and all of these are actions that must be made, not simply just thought through (though chess also requires a lot of “thinking through” before finally acting on a decision). It was this combined with all of the truly amazing people I met (too many to name) that then showed me that this wierdo project I was working on had a home, that there was genuine excitement about it!

Q: Structurally, is this a one-off project, or part of a trajectory throughout your work to date?

A: Often writing can get a bit lonely and so I really enjoyed the collaborative work Jody and I did together, a practice I don’t get to do nearly enough of in my own work. As for the poetry itself, I’ve always been drawn to writing longer projects – the two chapbooks I published with above/ground (http://aarontucker.ca/apartments/ and http://abovegroundpress.blogspot.ca/2013/05/new-from-aboveground-press-punchlines.html) were both small parts of a larger sequence – and so it is a bit strange to have the poems themselves be smaller and more contained. So, yes, I would say the actual poems being produced are quite different than what I typically gravitate towards but those shorter pieces are just one tiny part of the long process that went into building, and now maintaining, the site. Looking at my latest project punchlines (Mansfield Press, Spring 2015), I’ve used bits of code and mark-up through the poems with the same sense of connective tissue that I view the code and mark-up involved in the ChessBard. Along these lines, the satisfying parts of this project were not just the pieces produced, but the troubling through and editing the language templates, building the app itself (though Jody handled most of that heavy lifting) and even building the site itself and all the design and choices that went into that. All that scratched an itch that I don’t usually get satisfied when writing my other projects.

The ChessBard is definitely not a one off – I can envision a longer, “collected works” of a player that builds off some of the site’s content (http://chesspoetry.com/poetry/); I would love to collect and translate all of Marcel Duchamp’s or my favourite chess player, Jose Raul Capablanca’s, games. Plus I’m very excited to contributors to the site (http://chesspoetry.com/playingwriting/) talk about their experience playing with/against the ChessBard. Who knows? I would love to add more templates that included different verb forms or perhaps collaborate further with poets from other languages to build a multi-lingual ChessBard. As long as people are willing to play, the ChessBard will have a home.

Q: Finally: I’m curious about your literary influences. Who have been your models early on, or even more specifically, for punchlines or ChessBard?

A: I didn’t really find poetry I enjoyed and wanted to write like until I was in my first few years of college. I was raised on sonnets and couplets (which I’ve since come to really appreciate), but bristled, like an 18 year old know-everything, at the restriction I read into the forms themselves (ignoring the gorgeous language and precision within restrictions). The first book I remember loving was Ondaatje’s The Collected Works of Billy the Kid, a book I own three copies of, including the delightful first editions with the red-black Muybridge-esque cover. I also was introduced to bpNichol’s The Martyrology at the same time and re-read all 9 books this summer as I was writing punchlines. In both works, I find that delicate balance between lyrical gesture, play and conceptually-challenging forms combined with the same blending of multiple voices and languages (in a long form poem) that I’m battling to include in my own work. More contemporarily, Gary Barwin’s extremely varied and always frisky work (Moon Baboon Canoe but also the visual works that pop up on his Facebook) was immensely influential on both projects; too, Lisa Robertson’s work (recently Cinema of the Present), in particular the way she folds in some of the theoretical voices into such dense poetic activity, was very inspirational. Of course, there is also the plethora of online work that the Internet supplies, including the indispensable Lemonhound.
Posted by rob mclennan at 10:03 AM