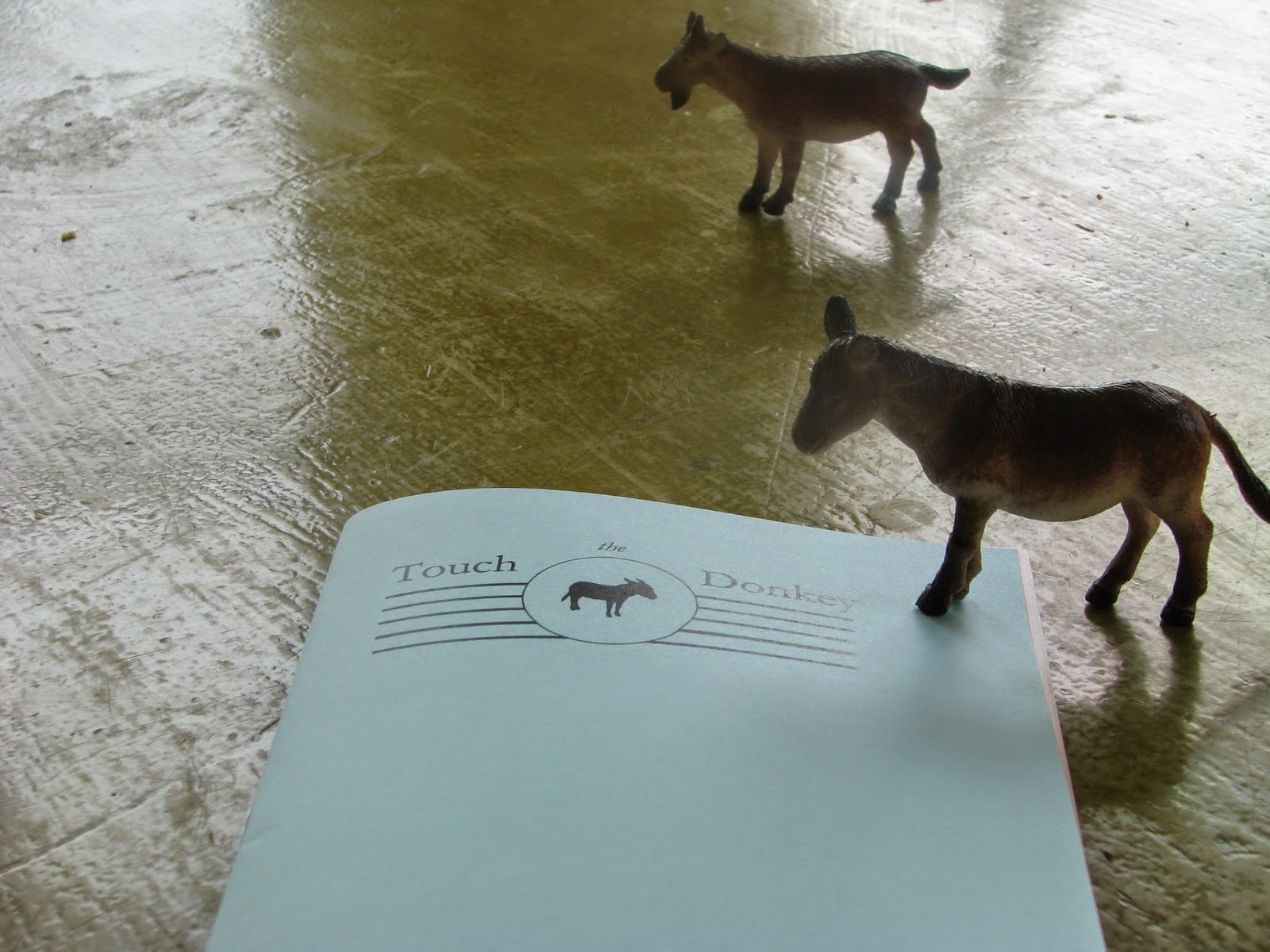 Susanne Dyckman is the author of a full-length volume of poetry, equilibrium’s form (Shearsman Books), and three chapbooks, Counterweight (Woodland Editions), Transiting Indigo (EtherDome) and Source (above/ground press).  Her writing has appeared in a number of journals, most recently the EtherDome Anthology, As if it Fell from the Sun.  She has been a finalist for the Ahsahta Press Sawtooth Poetry Prize and the EPR Discovery Award, and a winner of the Five Fingers Review Poetry Award. Her home is in Albany, California, where she hosts the occasional Evelyn Avenue summer reading series.

Her poem “Across the Street” appears in the second issue of Touch the Donkey.

Q: Tell me about the poem “Across the Street.” How did it originate?

A: The starting point was a boo-k of street photographs by Vivian Maier. I often use a visual image as a writing prompt, and am especially drawn to photography, most often urban landscapes. I’d heard of Maier a few years ago and was intrigued by her story and her work.

I find cities, their histories and inhabitants, compelling, so I easily engaged with Maier’s art. My process was to randomly open the book, look at a photograph and respond. I did not intended to describe the visual, but to use it as an entrance into a poem. Focusing on a physical image allows me to move out of myself, before moving back in. A type of tension develops between the external and the internal, and I find that generative. We all bring ourselves to the page, but I don’t necessarily want to start with myself. The image is the beginning, the first “other” with whom I am having a conversation. I allow myself to go elsewhere if I need to do so, and in this work I moved beyond the photographic frame, while still, I hope, holding its sensibility.

Q: Is response a normal part of your process?

A: It very often is, because to respond is to be engaged with something or someone, and that allows for an interaction through language that is of interest to me. I experience more energy in the process if there is a sense of some conversation/communication taking place through sound, meaning, and placement of words, as well as the blank spaces on the page. The sensed dialogue may actually be a monologue, but the spirit is one of connection.

Q: Is this part of a larger work that might end up seeing publication as a trade collection? What is your process of putting together a manuscript?

A: It will be part of a longer work (as I’m still writing this project), though I don’t know that it will be book length. I’ve found that trying to extend a series of poems, to continue with a theme or specific approach just to have more pages, is usually unsuccessful. I sense when a group of poems is finished, or, to put it another way, they tell me when they’re completed. I work best when I’m not looking ahead to what might be an end product, but stay in the present, with the writing.

That said, different projects can be combined, and may be more compatible than I would have initially thought when first writing them.

Putting together a manuscript is a great pleasure, whether it’s my poetry or another’s. I enjoy playing with how various parts might fit together, and how different arrangements alter the reading. Of course, attention to language is a key part of the process. How do the words of one poem lead into those of another? Where does one land and start again, poem after poem? Switching page order can create an unexpected, but no less effective, reading of the work.

I also think about how the pages appear in sequence. Are longer poems best set off with shorter ones? What’s the density of the words on one page, and what should follow? Just as I often use a visual image as a starting point for writing, I put together a manuscript with the visual in mind. When we pick up a book of poems we are not only reading the words, we are reading the shape of the poem, looking at its placement on the page, noting blank spaces as well as text.

Q: After one poetry collection and a small handful of chapbooks (as well as this current work-in-progress), how do you feel your work has developed? What, if anything, do you feel you are working toward?

A: I have another full-length manuscript that hasn’t yet found a home, and I’ve been working on a collaborative project with the poet Elizabeth Robinson. With the collaboration, there is an interaction of our very different voices and a resulting element of surprise that moves the work outside of the realm of authorship. Though it’s often clear who wrote which lines, it’s sometimes less easy (occasionally impossible) to identify, and that’s pleasing, because the poems then become something other than our individual contributions.

I’m not sure how to answer the question as to how my work has developed. That’s asking me to be more self-aware than I may be. Over the last year I have been writing in a journal every morning, mostly free-writing. This is not an uncommon practice for writers, but I set myself a goal of being disciplined about it for a full twelve months (I’m now on month eleven). I’ve filled many notebooks and I’m looking at that material to see how I might make poetry of it. I suspect that the work will have a different tone than my other projects, though maybe not. It’s all still very new, so I can’t yet say if I’ll find it successful, but I have many pages of raw material to draw from.

Q: I’m always curious about writers who work collaboratively. How did the project originate, and how, if at all, has the process of collaborating affected your individual work?

A. It began, at Elizabeth’s suggestion, with a plan that we each write a response to the same poem, preferably one of a writer whose work is quite different than ours. As we both happened to have the same edition of Vallejo’s collected, those poems became our starting point. We would alternate choosing one of his poems, each write a response, and then compare the result. The writing has since moved on from that initial prompt.

Has it influenced my work? I think I can say yes, but mostly that it has influenced my writing within the collaboration. In this kind of process there is always the echo of the other when one sits down to write. I am having a conversation with Elizabeth, so her language and sensibilities are on my mind. I will either write in contrast to that, or allow for some blurring, that is, write with a sense of what I think is her voice, though it is not always a conscious decision at the time. When we read our pieces together, it allows me a better understanding of how we each approach our own poetry. And, as I mentioned earlier, there is kind of delight that can result when blending the work.

Q: How far has the collaboration progressed so far, and what are you working towards? Are you attempting a full-length manuscript of such, or something more ongoing?

A: We didn’t begin the project with a full-length book in mind (the initial plan was, simply, to have fun), but the work has progressed, so that’s now a possibility.

Finding time for it can be an issue, as the collaborative writing has to take place along with our own independent projects and the other needs and distractions of daily life.   Much of the exchange has been long-distance, via email. When we’ve been able to be in the same location and sit together with the poems, the work has come together quickly. Because of these challenges, distance and time, I don’t know when we’ll turn to one another and say “it’s finished”, though I imagine that day will come. The creation of a third voice is such an interesting process I’m not sure I really want to see the work to end.

A: I always return to Wallace Stevens. He was the first poet to expand and deepen my sense of what language can do, and I never tire of him. Initially, and I’m talking about early in my poetry reading and writing life, I didn’t always understand him, but his work made me realize that understanding a poem as a traditional narrative didn’t matter. His language sang to me and that was enough.

“The Prologue” to The Canterbury Tales is another favorite, one I revisit often to remember how fun reciting can be, how poetry is a truly physical act as sound forms in the mouth.

There are, of course, many other poems that evoke a “swoon” response, work that makes me wish I’d written it myself. I’m tempted to list them all, to give those poets credit for being an inspiration, but then that wouldn’t be answering your question.

So, Stevens is the one.
Posted by rob mclennan at 9:00 AM