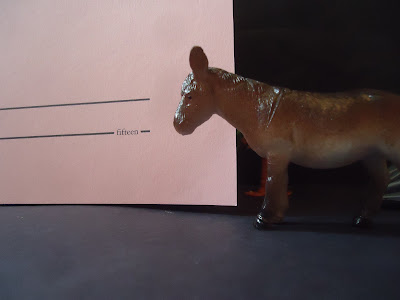 Cindy Savett’s first book of poetry, Child in the Road, was published by Parlor Press. She is also the author of three chapbooks. Her poems have appeared in journals including LIT, Word For/Word, and Dusie. She lives on the outskirts of Philadelphia with her family and teaches poetry workshops to psychiatric inpatients at several area hospitals.

Her poems “on the prowl,” “they follow themselves” and “you and her” appear in the fifteenth issue of Touch the Donkey.

Q: Tell me about the poems “on the prowl,” “they follow themselves” and “you and her.”

A: It’s always challenging for me to speak about my work – here’s a stab at it, though. The first two poems share the same struggle, coping with the death of my daughter, Rachel. The last is part of a group studying man/woman relationships – tension, power, hierarchy…

“on the prowl” – My child’s anger is stealing my future…I am responsible for her pain, become vulnerable. There’s no safe place for me.

“you and her” – To protect myself, I push away from Rachel by creating another identity (“you”), causing her fear and uncertainty. She tries to trap you, claim your sadness, take away your power. Your work is the navigation through the puzzle of your life and her death…made harder by cryptic clues.

“they follow themselves” – The man wants to mold the woman with his hands using her own life force against her. She counters by envisioning her strength, and assumes his momentum as hers. He becomes the scent of failure…she, the creator.

Q: What was the process of beginning to write about such a loss? Had you any models for this kind of writing?

A: Describing a process is difficult for me…Rachel died on a Friday night and I started writing about her and her death on Saturday sometime in the morning. It was pretty rudimentary, more just a full body scream, but over the following months it began to form itself into moments and pieces of art. Writing was saving my life, literally.

I began a search for other poets who’d had children die…I needed to see how they had found solace, how they integrated that into their writing. At times I found offerings about how to survive, how to want to survive. Yet I felt very alone and frightened with where my thoughts - and poems - were taking me. Ultimately, resonance and guidance came from poets more aligned with my aesthetic yet not necessarily working through a notable grief.

Q: Are you noticing any structural differences between these pieces and the poems you’d written prior? Obviously, the process of grieving a child shapes the content, but has it affected the cadence or the line or even the shapes of your stanzas?

A: Early on I worked with sparse lines, often single words to the line, with staggered indentations that created a strong visual expression of falling with no handholds as one went down. At the same time the words screamed for anyone to hear and yet held meaning and intent extremely close – my contradictory existence at that time. Hear me but don’t understand because that is not possible. As Rachel’s death grew further away I came to understand that ultimately I would be able to break through my loneliness by expanding my lines and listening to a different rhythm within. I shaped my lines around the white spaces differently, wanting to create more color (richness beginning to return to my life) within a wider band of unspoken space (an understanding of my relationship to living).

Q: With a published full-length collection and a handful of chapbooks, how do you feel your work has developed? Where do you see your work headed?

A: My early work, those poems in Child in the Road, were raw and emerged from listening to a painful and confused world. They were largely formed using a language that could only speak in abbreviated words, lines, stanzas. Stuttering out the overwhelming emotions and despairing thoughts, I was incapable of expanding the poem for fear it would become an open pit. As my life took on more stability I was able to flesh out what ended up on the page without feeling as if I was abandoning my tragedy, which had become a defining moment. My poems are now heading further away from what I consider to be a closed internal conversation into one that is inclusive and seeking the reader’s response as part of the poems’ purpose.

Q: What do you mean by “seeking the reader’s response as part of the poems’ purpose”?

A: As the years passed since Rachel’s death, I began to understand how great the split was between my oral and written words in the way I connected with others. I had successfully walled off where I considered my integrity to be housed: what I heard when I wrote. The reader was pushed away because I was frightened. Over time I realized my work could not continue to live in the vacuum I had created…my need to escape from my loneliness demanded I experience the poems as both my creations as well as a partnership with the reader who would offer me a way out of my isolation. My poems were then engaged in two very different yet critical missions.

Q: Can you speak further to those two missions, and how well you feel you’ve accomplished them?

A: It’s slippery…I am regularly tripping over my own feet as I sway between each intent. My ear and eye are inwardly pointed. My body is aware of its own workings and although I don’t breathe separately from the world, nonetheless I seem to remain what I consider too distinct. Yet it is in this space that I believe what my poems have to say. The difficulty is enormous when I connect those truths with my surfacing desire to break from conversations with myself. How am I able to move out and welcome in a reader who does not live inside me? Am I capable of hearing two realities at the same time thereby forming ties with others who want to read my words?

A: I tend to jump from poet/poem, one to another depending on what flies through my mind either while I’m writing, just wandering or aware of being very thirsty – Rukeyser, Transtromer, Hopkins, Aygi, Popa, Celan, Paz... many non-English writers. I seem to hear them more easily. It’s made me wonder often whether there’s another language beneath my words that’s supporting the poems.

Individual poems draw me in with an urgency that I experience in different parts of my body - right now, it’s “What Do I Give You” by Muriel Rukeyser. A little bit ago it was “The Mountains in the Desert” by Robert Creeley and two by Tomas Transtromer – “ Memories Watch Me” and “Midwinter.”
Posted by rob mclennan at 10:02 AM