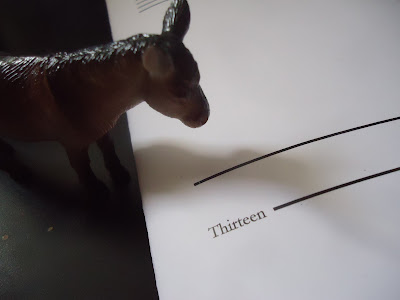 An excerpt, “from Ashen Folk,” appears in the thirteenth issue of Touch the Donkey.

Q: Tell me about the work-in-progress “from Ashen Folk.”

A: The poem sequence excerpted in Touch the Donkey is from an early section of my forthcoming book, Ashen Folk. The book continues a line of inquiry I developed in previous books like Galvanized Iron on the Citizens’ Band and Fright Catalog, wherein I classified and collaged the specialized language of subcultural, intentional or otherwise closed-off communities (military and trucker slang in the former, heavy metal and occult idioms in the latter). Given the subject matter, the language in those books tends to caricature performances of masculinity. In Ashen Folk I turn my attention to science fiction, fantasy and horror genres. I’m interested in how writers and filmmakers build the worlds of their books and films—the language used to describe the landscapes that permeate those worlds, and the creatures and races that inhabit those worlds. At the same time, it’s about my parents’ generation (roughly the generation of the 1960s and 1970s), and the worlds they attempted to build, and the words they used to describe those worlds—but also about how their world-building ultimately failed, both in everyday life as well as in more intentional communities like communes and spiritual cults. Part of the book traces the development of rock and (finally) hip-hop graphic design during this era, uncovering its incorporation of Victorian, Gothic, and Art Nouveau elements, as well as Hammer horror and psychedelic typography.

Q: What is it about the use of “the specialized language of subcultural, intentional or otherwise closed-off communities,” including the language of the 1960s and 70s (which could all be categorized as, one could argue, dialect) that appeals to you? What do you feel you’re able to explore that you couldn’t through other means?

A: I wouldn’t necessarily characterize the dialect of the 1960s and 70s, in general, as specialized or closed-off. Although I do think there is something about the way people spoke in the past that is inaccessible to us today, and therefore enigmatic and poetic, imparting an alternative knowledge. Sometimes watching old movies from that era, or from earlier eras like the 1930s or 1940s, I find myself entirely perplexed and astonished. (Diction like: “Innocence breakfasts!” in an early Theda Bera silent film still makes me happy). But for this project I’m specifically interested in counter-cultural slang; for instance, the weird, proto-fascistic, hipster drug speech one can find in some science-fiction novels from the era. I’m currently reading through old issues of the Berkeley Barb and the Berkeley Tribe, radical student publications…some of those old articles are so beautiful and so incomprehensible. But also so tragic. You can trace the early rumblings, in those weekly news and cultural reports, of the nascent California Ideology…the move from, say, Marshall McLuhan and The Whole Earth Catalog to Apple Computers and technocapitalism.

A: I’m not overly concerned with how this work is received vis-à-vis its form. I use different forms throughout Ashen Folk. Some of it is purely visual (including a transtypograph of Arthur Machen’s 19th century horror novella The White People, rendered in a black metal font…which makes the pages look like screenshots of the early 1980s video game Galaga). Some of the work is prose and could be considered fiction (including a first-person account of a ménage à trois between a father, a son, and an alien). And yes, some of it is in the form of lineated poetry. It has a loose narrative but it’s not a novel. It relies heavily on design, on typography and color, but it’s not an art book. If the book had a thesis or argument I suppose it could have been an essay, but it’s too fantastical, notional and full of suspended judgments for that. On the other hand I don’t tend to use the “lyric I” very often in my work. There are usually shifting points of view, different voices. For instance in my book Fright Catalog, there’s a line: “I BREATHE SPEARS/SERVILE/A SHAVING OF THE HORN OF THE ORTHODOX CAVEMAN.” I mean, that first person is not me. I’m not breathing spears around here. I also end that book with the line: “FOR ENGAGEMENT TO BE PROFOUND/IT MUST FIRST BE SUPERFICIAL.” For me that’s a consideration, not a maxim. I don’t necessarily agree with that statement. It was adapted from something I heard the artist Thomas Hirschhorn say and I consider it one of the many frightening propositions cataloged in the book. Similarly, a line from Ashen Folk that was excerpted in Touch the Donkey, “There is no such thing as a private ontology,” is from a passage by Antonio Negri where he discusses the constitution of the commons. But to get back to your question…poetry is just so capacious as a form. There’s a lot of tolerance for what a poem can be. And the people I consider my peers, my coterie, are poets. My work is published and circulated in the context of poetry. I run a poetry reading series and publish poetry journals and poetry books. And I think the type of hybrid work I create is most at home, and best understood, in the context of poetry.

Q: How do you feel your work has progressed over the past decade or so, through three published books and a small mound of chapbooks? Where do you see your work headed?

A: I mentioned earlier that I think you can trace a line of inquiry from book to book, if not chapbook to chapbook, from Galvanized Iron on the Citizens’ Band to Fright Catalog to Demon Miso/Fashion In Child. But I only really started writing poetry seriously a little more than a decade ago. And actually, there’s a prose poem in Ashen Folk that’s just about a decade old—I remember reading it at my first reading ever, with the poet Simon Pettet (I recall him looking on skeptically from the audience). I’ve placed it in a new context, but it’s one of the first pieces of writing that I self-consciously thought of as “poetry.” Lately I’ve been working on short, 11-line poems, not-quite sonnets, but possibly the first poems I’ve written that look like traditional poems. I’m not sure how I feel about them yet. So far they seem to offer a counter-vision or end-game to the concerns of Ashen Folk.

Q: I’ve friends who are attracted to what they refer to as the endless mutability of the sonnet, a form that might be impossible to exhaust. What attracts you to the form, and what do you think you bring to the conversation of the sonnet?

A: I’m not sure if these poems are actually sonnets, which is why I call them “not-quite sonnets”.  There is no octave, sestet or volta. And I use no rhyme scheme. So they’re not traditional sonnets by any means. But as you point out, the sonnet form is endlessly mutable. It’s the sonnets of Bernadette Mayer, Ted Berrigan and Clark Coolidge that inspire me. Especially Coolidge—and even more than his sonnets, I love his weird, short poems in On The Nameways. If I could write poems even a fraction as good as those I’d be satisfied, because those are amazing poems, infinitely interpretable. But what I’m attempting to do is much narrower. I’m trying to write from a genre-specific place of science fiction and fantasy.

Q: Can you speak more specifically about that? What is it about the “genre-specific place of science fiction and fantasy” that you wish to explore via poetry generally, and, specifically, the sonnet?

A: I spent a semester last fall at Cal State Bakersfield leading a symposium on poetry, art and fandom. We called it the Bakersfield Fan Forum. We looked at poets and visual artists whose work seems to be motivated by enthusiasm for culture (pop and otherwise) rather than by traditional scholarship or research interests. We kept coming back to the concept of “critical intimacy.” Instead of traditional critical distance, we found that many poets and artists create work that is expressed as a type of enthusiasm or condition of love and empathy, even while the work itself retains a certain amount of criticality. I feel I often create work this way. At heart I am a fan of science fiction, fantasy and horror—I love certain elements about these genres and find them endlessly generative. But I also find certain elements problematic. And I find my love and enthusiasm problematic. Love, it’s a problem. I’m interested in exploring the tension between this enthusiasm, this love, and the fucked up things about our culture. The sonnet seems a suitable form to explore this tension—the sonnet traditionally has a problem/resolution structure. Even when it doesn’t, as in some postmodern collage type sonnets, there is a concision in the sonnet that appeals to me.

A: It may not come as a surprise that it’s typically not poetry! Thomas Ligotti, Octavia Butler, Philip K. Dick, Borges, Proust, Lovecraft, Djuna Barnes, some of the comics of Alan Moore, Dan O’Neill’s Odd Bodkins, the children’s books of Mercer Mayer, the films of Rainer Werner Fassbinder, Agnes Varda, John Carpenter and early David Cronenberg …whenever I get really sick I curl up on the couch and watch the entire extended edition of Peter Jackson’s Lord of the Rings trilogy over and over…sometimes I like low fantasy and sometimes I like something a little grimdark…the art of Brian Froud, which must be attached to some primal childhood memory…I probably revisit the classics of dada and surrealist literature more than once a year…I have a silly tradition of re-reading James Joyce’s The Dead every Christmas…I listen to a lot of black metal and new age music, both genres calm my mind from sort of opposite spectrums…I have an edition of Robert Grenier’s CAMBRIDGE M’ASS hanging in my room that I turn to daily, always finding something new in it…the poetry and essays of Will Alexander…the writings and art of Mike Kelley…I won’t even get into all the television shows I watch…I could go on…