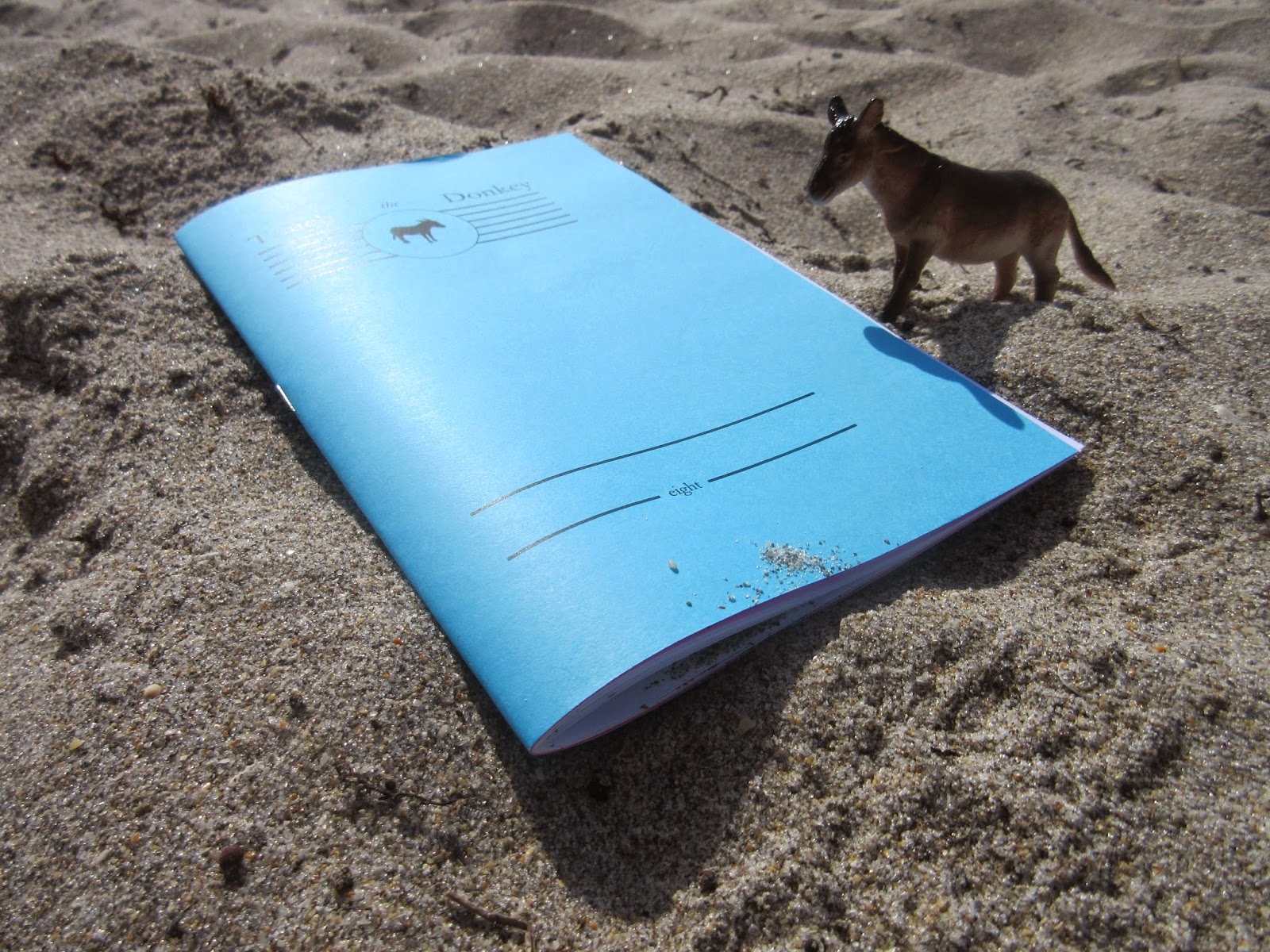 Sonnet L’Abbé, Ph.D., is a poet, essayist and public speaker. The award-winning author of two collections of poetry, A Strange Relief and Killarnoe, L’Abbé is the guest editor of Best Canadian Poetry 2014 and was the 2015 Edna Staebler Writer in Residence at Wilfrid Laurier University. She has taught creative writing at the University of British Columbia Okanagan and at the University of Toronto’s School of Continuing Studies, and is currently a creative writing instructor at Vancouver Island University.

Her “3 Colonizations from Sonnet’s Shakespeare” appear in the eighth issue of Touch the Donkey.

Q: Tell me about “3 Colonizations from Sonnet’s Shakespeare.”

A: Sonnet’s Shakespeare is one of the book projects I’m working on. Its procedure is an allegory for colonialism: I write from the perspective of both colonizer and colonized, “over” the “traditional territory” of English literature (Shakespeare’s text) and attempt to impose upon it my own descriptions of the world. The process is a mode of erasure that works by overwhelming rather than excising, one that hides the original text in plain sight, and attempts a muted bivocality in the reading experience. The original poem exists in its entirety on the same page, but reading it requires a cultural knowledge that remembers what to look for.

For example, the first words of Shakespeare’s “Sonnet 31” are:


Thy bosom is endeared with all hearts.

The first line of my colonized sonnet, “XXXI,” is as follows:


The academy sabotages promising energies by demonizing a real world.

Q: What was it about Shakespeare’s language that made you choose his work to explore “the perspective of both colonizer and colonized,” as opposed to any other writer’s works, or even through composing poems generated through other means?

A: I became interested in the potential of this procedure when I read discussions of erasure poetics that celebrated only the “discovery” or “unearthing” ethos of the erasing poet, leaving unexamined the conditions of the availability of the source text to be used in this way. It seemed that with the resurgence of erasure, particularly in the U.S., the logic of found poetry had moved into a more explicitly appropriative and objectifying stance toward the materiality of text. There was an indifference to the liveliness of original texts that I wanted to overturn.

At the same time, I was feeling creatively constrained by the appealing or counterevidentiary stance of identity politics writing. I wanted new forms and new tones to express my relationships to power. And one of the tones I want to explore is that of my own aggression, opportunism and sense of entitlement.

Like-minded Canadian poets nourbeSe philip, Shane Rhodes and Jordan Abel have all used erasure (on legal documents as well as other writers’ texts) to allegorize the censorial practices of colonialism. I decided to work with the pile-on, the overwhelm strategy of colonialism. If, I wondered, erasure poetry can be an allegory of colonialism’s attempt to eradicate extant cultures, what is the equivalent of colonialism’s propensity to reframe the stories of colonized people, to “talk over” existing voices so loudly that the cultures are, at important levels of voice, silenced? Though colonizers often nearly destroy the legibility and visibility of the presence of original cultures, they are often not fully successful at eradicating that presence.

I chose Shakespeare because I wanted to use a canonical text; I wanted a work that is an uncontested, valued piece of literary heritage for English language readers. If there is such a thing as a cherished literary ‘cultural artefact’ for Anglo readers, I think most of Shakespeare’s better known works qualify. I suppose I could have used one of his plays. But then we wouldn’t engage with the cosmic confluence of my name with this form, I wouldn’t have had to put my ego as front and centre, and the title wouldn’t be as rad.

There is also a mini-tradition of using Shakespeare’s sonnets in procedural work that includes collections like Jen Bervin’s Nets, Stephen Ratcliffe’s [where late the sweet] BIRDS SANG, and K. Silam Mohammad’s Sonnagrams, as well as anthologies, like Paul Legault and Sharmila Cohen’s The Sonnets: Translating and Rewriting Shakespeare, and Jeff Hilson’s The Reality Street Book of Sonnets. I’ll play; I'll rep for Canada.

Q: You mention that this is but one of multiple book projects you’re currently engaged with. What else are you working on, and how do these projects relate to each other, or even your two published poetry collections?

A: I’ve been at work in fits and starts on a project originally called Sentient Mental Flower Book, in which I explore the metaphor of the plant-as-human and the human-as-plant. Formally I envisioned it as a poetic reinvention of the sentimental flower book, a form that was a popular and commercial form in the Victorian period, that I have argued is a kind of domestication of the scientific, botanical writing white British and American women were doing at the end of the eighteenth century. I’ve found it hard to generate a volume of poetry on this topic when I have been covering the same imaginative ground for years in other genres: I’ve based both my PhD dissertation and my creative pedagogy for past three years on the intersection of language, plant and mind.

I rewrote one of Virgil’s georgics a few years ago; instead of the poet advising farmers about the best practices and conditions to maximize crops, in my version the poet advises a plant geneticist on the mutation of an aribidopsis thaliana plant. It’s factually correct and draws on over a dozen scientific papers. I thought this was part of Sentient Mental Flower Book; I think now it should be its own short project. I’ve written parts of new georgics based on the rest of Virgil’s, all conceived as speaking to the gods, to city officials and to farmers – but in the age of corporate agribusiness, big pharma, Whole Foods, medicinal marijuana, etc. I’m calling it PHARM.

Both Sentient Mental Flower Book/PHARM and Sonnet’s Shakespeare are about resources, land, territory, husbandry, and the relation of these to culture, language and racialization. My earlier books approach these topics in more lyric ways and are my first and second explorations of the ideas that won’t leave me alone.

Q: You mention erasure works and other procedural works that have specifically targeted Shakespeare’s works. What do you feel your work in the procedural allows or illuminates that more straightforward lyric structures might not?

A: One of the effects of a good traditional lyric voice is a transparency effect, which gives the reader the illusion of a kind of clear access to the movement of the poet’s perception and sense. The voice that covers over Shakespeare in my work is often a lyric (singing, imagecrafting) voice, but it’s impossible to read the text as language representing peak clarity in the tracing of the flow of Sonnet L’Abbe’s perception and bearing. There is always something – preexisting culture – inflecting my word choices beyond my own impulse to choose the best word. “Shakespeare will forever subutter my restated colonial legacy.” Further, I think lyric (a mode I also love to work in) produces a kind of intimacy effect that cannot adequately harness, in its aesthetic frame, certain difficult energies, particularly around racialization, sexualized violence and colonization. I think of women’s writing around victimization, for example. With this procedure, I am forced to choose other language than the first words of rapedness, anguish, anger, defiance, etc that might come to me. I am forced to do this in lyric practice too, but those choices are informed by wanting to key into a certain kind of musicality that marks the text as poetic. With this procedure, my first word choice is already interrupted by the directive to overwrite Shakespeare, and that textual engagement marks the work as poetry, such that my music and image are free to be much more directly political or sexual than what generally works in straight-up lyric.

Q: With two published trade collections over the past fifteen years, as well as your current works-in-progress, how do you feel your work has developed? What do you see yourself working towards?

A: I keep working, writing, to become more and more comfortable with myself and others and to learn to love others and to love being alive. It’s slow work because my writing is an intentional engagement with the social, which means it’s an engagement with how my body lives the social, and therefore an engagement with my own mental and physical health. That I work out various levels of traumas and desires in writing, and that being comfortable with myself involves inscribing myself in weird syntaxes of identity, country, belonging and beauty, is just the way my body figured out its survival. Bringing the body along in the quest to be a wise writer is the greatest intellectual and spiritual work there is. For the longest time I felt people saw only my performance ability, not me. Poetry was always this tense ground of trying to perform and please aesthetically while also acting completely on my own behalf. Sentient Mental Flower Book and Sonnet’s Shakespeare are big performances, but more consciously so. I can now imagine a reader who might come from the same place as I do, instead of always imagining my reader as a ruthless formalist competitor or as a benevolent oppressor. One day I’d like to drop the shield of poetry and venture into the vulnerability of prose. I’m making it sound so pretentious. I just keep trying to be a good writer as if one day the right words will bring me peace. I don’t know which will come first, the book that earns me a sense of belonging, or finding the sense of belonging that allows me to write books from a new place.

Q: I’m curious about your descriptions: the “shield of poetry” and “the vulnerability of prose.” Is this a comfort that comes with your own experience with each specific genre, or is there something else? What is it about prose that you consider opens one up in a way that poetry does not?

A: Poetry opens up to, or invites to play, a smaller, more specialized audience. If someone sits down to read your book or your poem, so much empathy is already there just by virtue of your reader wanting to be in the poetry space. I feel like I retreated to poetry when it seemed no one was interested in my stories. When I was 19 or 20 years old, I wrote thinly-veiled fiction about things that I felt strongly about, and when the work didn’t move my teachers, I stuck with what did. Like I said before, I started out very much wanting to please, and it’s been years of writing and grappling with internalized BS to get past that, to feel that I can please or not, on my own terms. I still want to write prose.

A: The Norton Anthology of Short Fiction, edited by Bausch and Cassill, and the Native Poetry in Canada anthology, edited by Jeannette Armstrong and Larry Grauer, are my return-to reads these days. They’re by my bed. The kingpins and queens of hiphop are fuel to me. Writers whose work I go back to: