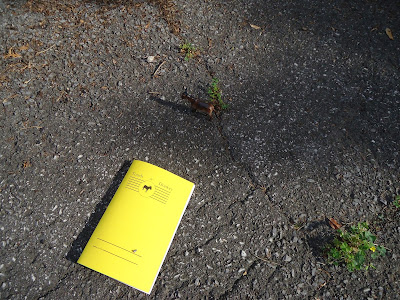 Kathryn MacLeod lives, works, gardens and cycles in Victoria, BC. Her books and chapbooks include mouthpiece (Tsunami Editions, 1996), How Two (Tsunami Editions, 1987) and the more recent Entropic Suite (above/ground press, 2012), much of which was written as part of her dissertation: Transgressing Words and Silence: Aesthetics, Ethics and Education (UBC, 2011), which explores the relationship between ethics, aesthetics and education using the limit case of art created in response to the Holocaust. Her poetry has appeared in numerous literary journals and anthologies, including Companions and Horizons: An Anthology of Simon Fraser University Poetry (2005), Writing Class: The Kootenay School of Writing Anthology (1999), and East of Main (1989). Recent publications in journals include: ditch (September 2013), dusie (July 2013); seventeen seconds (Winter 2013) and Truck (August 2012).

Her poems “Crows and Gulls,” “Regulus” and “Wandering Star (NYC)” appear in the seventh issue of Touch the Donkey.

Q: Tell me about the poems “Crows and Gulls,” “Regulus” and “Wandering Star (NYC).”

A: Although these poems were started at different times, in different contexts, I struggled with each of them for a year or more. I didn’t know what I was trying to do with each poem for a very long time—they all went through many versions and were left for months unfinished. At times, I gave up on each of them.

Rereading, I see that “Crows and Gulls” and “Regulus” are related thematically—both having come from exploring grief and loss. “Regulus” was written in response to the death of a young person, not someone I knew well, but as witness to the family’s tragedy. “Crows and Gulls” is an attempt to write a succinct and precise poem about an experience of loss that is imprecise, ambiguous, and, in some ways, irreparable. A poem about change, the dissolution of meaning, the inability to communicate.

“Wandering Star (NYC)” is the second in a series of poems about traveling to other places, both physically and metaphorically. It is a poem about my love for cities and ideas and philosophies. I wrote it for Maxine Greene, a philosopher who lived in NYC until her death at age 96 this year. Her deep love for art and literature and her understanding of their connection to the day to day world of learning continues to inspire me. A “wandering star,” by the way, is a lovely archaic term for a planet.

Q: How do you see these poems in relation to the work you’ve done prior, from mouthpiece and How Two to Entropic Suite?

A: There was a long gap in time between mouthpiece and How Two (written in the 1980s), and Entropic Suite (2012). When I began studying poetry in the early 1980s, my work, and the education I received, was very conservative. I wrote lyrical poetry focusing on imagery and precise language and structure. It was good training, but restrictive. When I was introduced to the Language poets in the mid-80s via the Kootenay School in Vancouver, it opened up my work and I started to experiment with form. The poetry of How Two and mouthpiece was written during that time. I had been introduced to some of the postmodernist philosophers before I became involved with the Kootenay School, so the ideas were not new to me—just the application in art.

Entropic Suite began during the writing of my dissertation, completed in 2011, which focused on aesthetics, ethics and education, using the work of three artists who created art in response to the events of the Holocaust, and viewed through the philosophical perspective of Kant and Lyotard. The poems in this series were part of my scholarly exploration of these ideas. After a long silence, the poems of Entropic Suite seem to me to combine the sensibilities of both schools to which I had been exposed as a young poet. I no longer feel constricted by either content or form or aesthetic schools. I have a better understanding of why I am writing and who I am writing for. My current work, I believe, reflects a much deeper understanding of the nature of art and the practice of poetry.

Q: How difficult was it to re-enter writing after your long silence? Or was it almost a matter of being triggered by, as you say, new sensibilities blending in with the old?

A: It was not difficult at all, oddly. The poems arose naturally out of the research and writing I was doing—the ideas I was exploring and thinking deeply about as I wrote my dissertation. In the process of working on my doctorate I wrote a number of essays examining the nature of art in multiple mediums, and during that time the boundaries between scholarly and creative work began to blur for me. I had very supportive faculty who encouraged me to explore both with form and content. So although I started writing the dissertation in a more traditional format, I was encouraged by my advisor to go outside those boundaries. One of the great pleasures of working on my dissertations was finding the connections between the scholarly work and the poetry, and placing them so that they worked together. There is such joy in those moments of discovery!

I wrote a few of the poems in Entropic Suite afterwards—that is, after having completed the dissertation. So it was rewarding to see the poems stand on their own, in a separate, but connected project.

Q: Do your poems normally emerge from research?

A: My first reaction to your question was to say no, and then I rethought... In fact, my poems often emerge from something I am reading and thinking and wondering about. So while it may not be formal research, in fact I am often following a trail of questions in my reading and thinking. I often don’t know what I really think about something until I write about it—I have read other writers saying the same thing—and I find this to be very true. In different kinds of writing the outcome is expected to be different, of course. In scholarly writing one is aiming for less ambiguity, while in poetry I hope to embrace or at least rest in the ambiguous. A kind of Buddhist approach to meaning. That tension is always there for me when I write, I think—the tension between trying to fix meaning and trying to open it further.

Q: Who have your influences been for this kind of approach to meaning?

A: I think the influence comes from a number of directions. Most obviously, the language writing influence from the 80s, and from particular poets like Susan Howe, whose work will always be extraordinarily important to me. But even before that I was introduced to the French feminists (Cixous, Irigaray), and although I wasn’t able to synthesize it at the time, they were my real introduction to the postmodern focus on language and the contingency of meaning. I still recall first reading their texts, and while I found them difficult and startling, I understood the significance of what they were trying to do.

Also, and certainly more recently, Buddhist philosophy and practice. The way one struggles in meditation is very much about struggling with the impermanence of meaning. Over time, one can see it in oneself—the tension between longing for permanence and watching it slip away, over and over again.

Resting and wrestling in and with the unknown. The writers, artists and theorists who speak to me do so because they struggle in this same way. I mentioned the philosopher Maxine Greene previously. She wrote that “informed encounters with works of art often lead to a startling defamiliarization of the ordinary.” We create meaning in our ordinary lives every day; we want meaning to be solid and real; we are so often sadly reminded that it is not. Meaning fails us, and thus we look for new meaning. I imagine I will always write about this.

Q: Are you working on anything specific at the moment, or simply feeling your way through the poems as they come?

A: I am working on poems as they come, at the moment. I started a project last year, but having gone back to it recently, I realize that it is too soon to see it as a whole. So perhaps it will come together some time in the future.

Q: I know you touched on a bit of this earlier, but wondering: who do you read to reenergize your own work? What particular works can’t you help but return to?

A: I mentioned Susan Howe—I go back to Articulations of Sound Forms in Time over and over, and find something new each time. There are two copies of that book in our house.

I read PK Page and Phyllis Webb when I want to go back even further. I read Mavis Gallant and Nadine Gordimer when I crave fiction, and Annie Dillard to be reminded of the power of observation. I read Maxine Greene when I forget why I write. Most of the time, I read widely, and eclectically.
Posted by rob mclennan at 10:01 AM