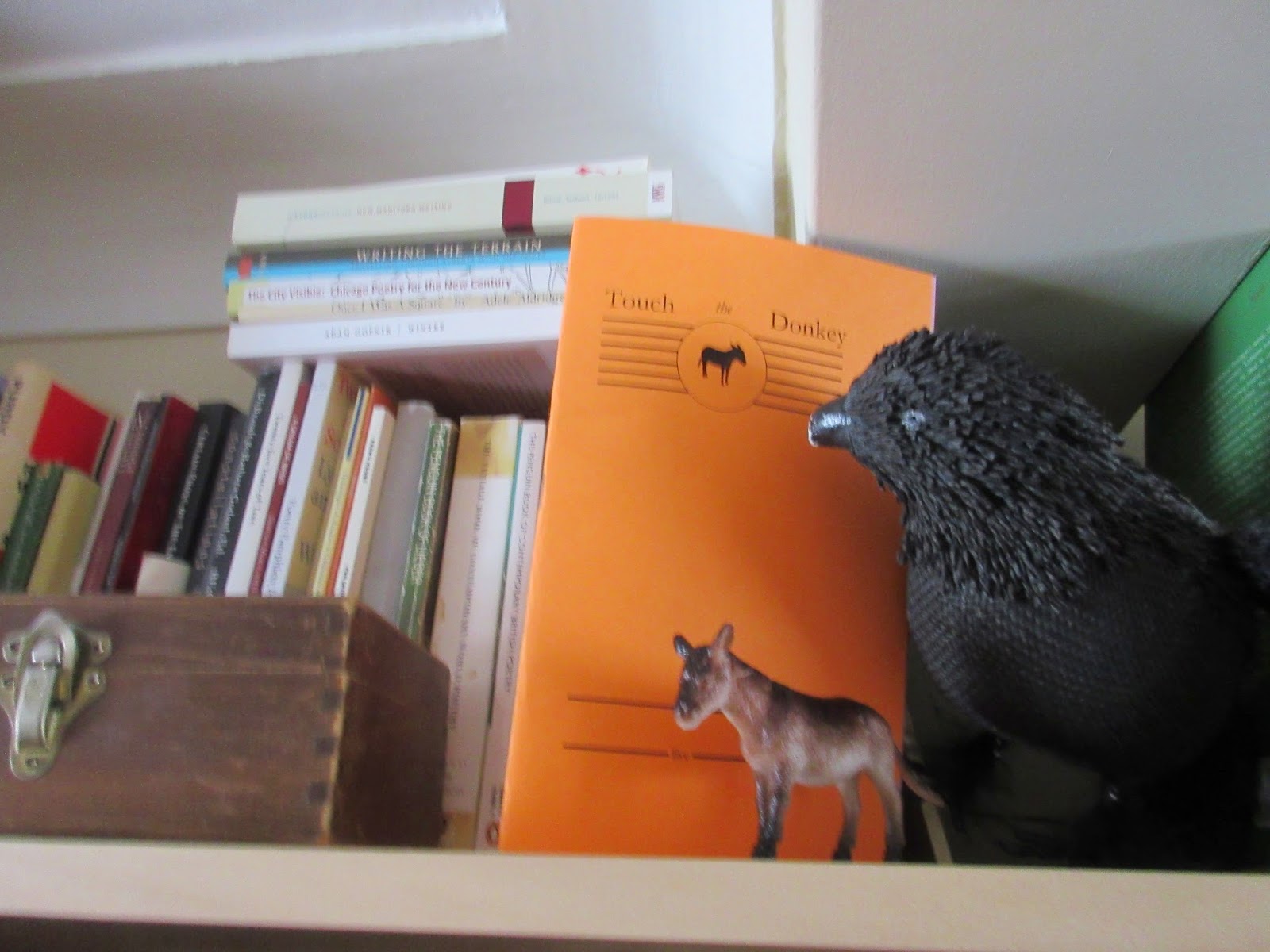 nathan dueck is the author of two poetry collections, king's(mère) (Turnstone Press, 2004) and he’ll (Pedlar Press, 2014), as well as the chapbook @BillMurray in Purgatorio (above/ground press, 2013).

His poem “Green Slime” appears in the fifth issue of Touch the Donkey.

Q: Tell me about the poem “Green Slime.” In your email, you said it was a poem about you can’t do that on television, the young adult television show produced by CJOH-TV in Ottawa throughout Ottawa, infamous in part for introducing Alanis Morrissette, as well as the “green slime,” which has appeared regularly on Nickelodeon over the twenty-plus years since. Why did you decide to write one on an out-of-date kids show?

A: “Green Slime” is a poem from a project I’m working on right now. It’s a series of poems that draws on the pop culture that formed my lazy youth. I was an “indoorsy” child who read children’s books on the same couch that I watched cable TV. I.e., I’m writing poetry that combines childhood stories and shows. “Green Slime” is a poem about you can’t do that on television that I wrote in the form of Lewis Carroll’s “Haddock’s Eyes” from Through the Looking Glass. Because Carroll parodied Wordsworth with “Haddock’s Eyes,” I wrote a parodic poem about a kids’ show. As I was writing, though, I found that legit reference comedy was less fun to write than reverential homage.

Q: How much can you talk about the current project? You seem to work very much on projects that are book-length. Is working in the book as your unit of composition something you do deliberately, or something that evolves quite naturally? How, in fact, do you put a manuscript together?

A: My work-in-progress is tentatively titled “CRTC.” (I'm not sure that I’ll get away with that title.) I’m writing a series of poetic forms and modes about pop culture, but culture that isn’t really “popular” anymore. These are old-timey poems about cartoons, comic books, magazines, video games that have become the white noise of my mind. As I age out of the 18-35 demo, I’m becoming nostalgic for the late ‘80s / early ‘90s static – I can no longer ignore the culture that informed the lifestyle of this slovenly “indoorsman.”

You’re right to point out that I tend toward writing book-length projects. Previously, I’ve written with one eye on the book as a unit of composition, but I’m trying to stop. I’d like to think of “CRTC” as more of a “greatest hits” package, which means I’m focusing on each poem as part of a collection. Who knows, it may turn out to be a book that readers tirelessly flip through like channels during commercial breaks.

Q: Why are you trying to stop?

A: “Stop” may not be the best word. Maybe . . . reconsider? The reason is, when I look at the book as a unit of composition, I get caught up in writing about particular characters in a specific setting. Reading, then, demands attention for the duration of the book to make sense of any part of the book. I’m interested in developing another sort of aesthetic with this project. I’m trying to write poems that stand on their own.

Q: Your book-length projects so far could each be considered to be response works, from the exploration of Prime Minister Mackenzie King of king's(mère) and the exploration of Mennonite language and culture of he’ll to what you discuss of the new work-in-progress. After two books over the space of a decade and your current work-in-progress, how do you feel your work has developed? Where do you see your work headed?

A: I’d like to say that I know where my work is headed, but I don’t. I also don’t know why I took a decade between books. I mean, I’m grateful to have published two books, but don't want another decade to pass before the third. I’m interested in your use of “response works” because the phrase relates to the way I try to parody other texts. I’d like to think that my understanding of irony as developed: where I have been caught up in subverting previous texts, I’m now catching on to juxtaposing texts.

Q: What is your attraction to composing texts using parody or satire?

A: I see parody (not satire,* exactly) as a way to acknowledge my texts as texts -- as language, as material, as footnotes of literature far greater than my own.

* These days, I can’t help but cringe while reading satire – I don’t feel bad about that expression, though, because I’m assuming satire is written through a sneer.

Q: I’m curious about your evolution into more traditionally formal exploration of “Green Slime.” Is this the difference, possibly, between your current work-in-progress and your previous works: the attempt to focus more on the individual poem?

A: Yep. I took the form of “Green Slime” as a challenge. Carroll dropped a gauntlet I had to run through – metrically, rhythmically, and tonally. We’re living in the age of avant garde, or post-avant, poetry that is based on constraint, so I base this poem on the constraints of another age. (By the way, is it possible to think of constraint-based lyrical poetry as experimental in 2015?)

A: Three books from the last year that just won’t stay shelved are Louis Cabri’s Posh Lust, Jeramy Dodds’ The Poetic Edda, and Rachel Zolf’s Janey’s Arcadia.
Posted by rob mclennan at 9:29 AM