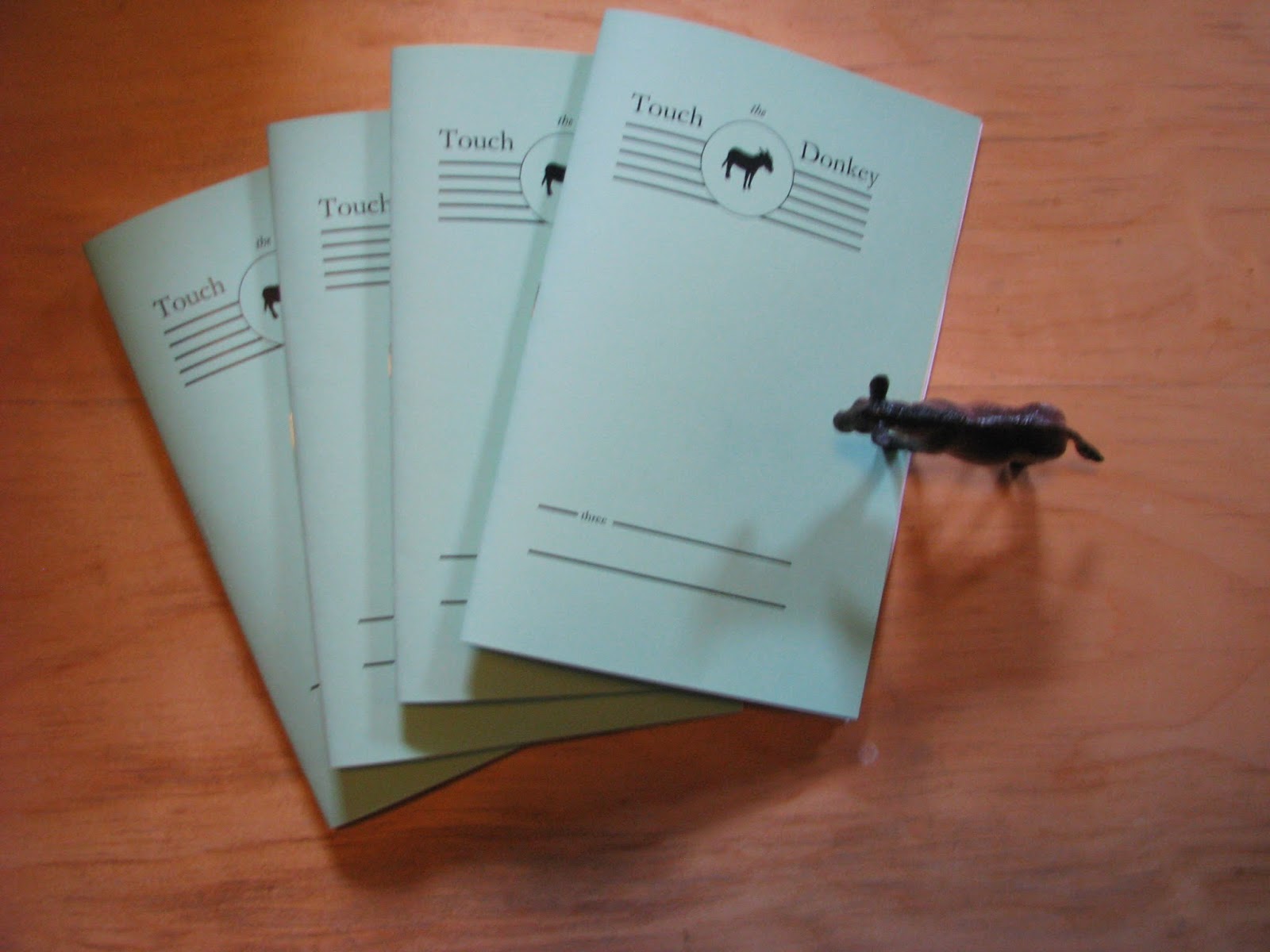 Susan Briante is the author of Pioneers in the Study of Motion and Utopia Minus, both published by Ahsahta Press. She is an associate professor of creative writing at the University of Arizona.

Her piece “THE PHYSICISTS SAY CONSCIOUSNESS” appears in the third issue of Touch the Donkey.

Q: Tell me about the poem “THE PHYSICISTS SAY CONSCIOUSNESS” How did it originate?

A: For a while, I wrote poems that intersected with the stock market, then searched for another lens through which to look at my world. I started reading articles about contemporary physics and started writing a series of poems in dialogue with the discipline. I found an article that explained how consciousness could be expressed through an equation. (The actual article is written by a neuroscientist, but the impulse that everything could be mapped by equations struck me as having very much to do with the realm of physics.)

Around the same time, our family dog—a wonderful American bulldog named Moon—passed away unexpectedly. As a result of our dog’s death I was confronted with the problem of explaining mortality to our 3.5-year-old daughter without relying on the tropes of Christianity, no longer part of my belief system. I find Buddhist thought and physics comforting in their world views (not without their own spheres of intersection), but I struggle with how to translate those beliefs and possibilities into a language a child can understand.

Q: I know you’ve been working poems utilizing scientific content for some time, so I’m intrigued to hear that you were working on “poems that intersect with the stock market.” What is the appeal with working on poems utilizing, for a number of readers, might be considered “non-poetic” material? What are the difficulties with attempting to work through such subject matter, and what do you think you bring to the conversation between poetry and science?

A: At the University of California San Diego, Rae Armantrout and the astrophysicist Brian Keating have teamed up to teach the course Poetry for Physicists. At the on-line magazine Jacket2, poet Amy Catanzano has written a series of stunning short essays tracing intersections between poetry and physics or what she calls Quantum Poetics. If you want to read my thoughts about the connections between poetics and the stock market, you can find them in my essay “Notes Towards a Poetics of the Dow” at The Volta (http://www.thevolta.org/ewc5-sbriante-p1.html).

For centuries poets have engaged with the most powerful forces or institutions of their time whether we are talking about the Church or the natural world. Defending poetry against accusations that it had no place in a world dominated by scientific thought, Shelley asserted the poet “beholds intensely the present as it is, and discovers those laws according to which present things ought to be ordered.” I find the lyric to be an ideal place to map out connections or to explore what Muriel Rukeyser called “the processes and the machines of process” as a way to understand the human condition.

Q: There is something in your essay that is reminiscent of, say, Picasso incorporating influences of African art into his own, which brings about a wave of new energy and influences into European art, thereby irrevocably altering both. Was it a matter of wishing to incorporate a fresh vocabulary into poetry or the engagement with foreign subject matter that first brought you into the idea? And is what brought you in the same reasons you remain?

A: I think as poets we are always excited by language, so yes there is something in addressing a new vocabulary. I was also very interested in engaging with the economic “crisis” of 2008, which marked the beginning of a new economic normal for many people as well as the beginning of a kind of narrative crisis. We measure of our “health” in the United States through economic indexes like the Dow Jones Industrial Average. Most news broadcasts end with those numbers. But why? That’s not an inevitable choice. The nation of Bhutan, for example, measures Gross National Happiness (http://www.gnhbhutan.org/about/) instead of Gross National Product. I created the many of the poems that make up the manuscript, The Market Wonders, by recording the closing number from the Dow Jones Industrial Average (DJI), then plugging that number in a variety of search engines that would lead me to texts. I use those texts and closing number of the DJI to inspire or influence the poems I was writing. You can find examples of them here (http://www.poets.org/poetsorg/poem/october-14%E2%80%94-dow-closes-10015) and here (http://atticusreview.org/may-26-the-dow-closes-down-9974/).

The DJI became a lens for me and as I finished that project, I started to look for a lens. For the moment, science, especially physics, has been offering a new viewpoint for me. In the end, it is often about seeing how these perspectives, sets of knowledge, and vocabularies intersect with and inform the quotidian.

Q: When composing poems utilizing either the stock market or physics, how deeply do you need to understand something before you allow yourself to incorporate it into a poem? Or are you learning as you go, and utilizing information as possible bouncing-off points into further possibilities? Or, as you suggest in your first answer, is it all simply a variation on translating ideas, beliefs, and concepts into another series of possibilities, including poetry?

A: I think it is important to treat any subject matter with respect. Naturally one doesn’t want to get things wrong. I tend to read a lot, deeply but also broadly, looking for intersections between fields of knowledge as well as considering the possible blind spots inherent in whatever viewfinder I choose. I’ve always been attracted to poems that offer glimpses into thought processes. I don’t mean stream of consciousness but a recording of awareness. I don’t ever want to colonize material, using it in service of an argument. The poem is not the 5-paragraph essay. The poems need to be a site of active thinking.

Q: That’s the best description of poetry I think I’ve heard yet: a site of active thinking. You’ve already mentioned poets such as Rukeyser and Armantrout, but what other poets influence your work? What writers or writing can you not help but return to?

A: I’m currently reading Lisa Robertson’s XEcologue (which opens with the stunner: “I needed a genre for the times that I go phantom”) and Nilling. Robertson is such a fierce thinker and beautiful writer. I return to and turn to her work when I need to sharpen my mind. I just finished reading Brenda Hillman’s Seasonal Works with Letters on Fire, an amazing conclusion to a poetic journey that begin with her book Cascadia. A stack of books await me later this summer as I prepare to teach a course on the lyric “I” and experimental autobiographies: Bernadette Mayer’s Midwinter Day, Alice Notley’s Mysteries of Small Houses, Lyn Hejinian’s My Life and of course Wordsworth and Shelley.

I’m also supposed to be reading Capital in the 21st Century for a reading group, but I have not started it yet.

Q: A number of the examples you mention are poets working within the framework of the book as unit of composition. What is your process of constructing a poetry manuscript? Are you aware of the book as your compositional unit, or do you focus more on the individual poem, or handful of poems? Are your books constructed as complete units or more as a collection of disparate parts that eventually cohere into larger projects?

A: I’ve always enjoyed writing poems in series. It’s a way to avoid the absolutely blank page. That said, I think the book as a unit of composition is very fashionable right now. Maybe that’s reason enough to proceed with caution. The danger of the book project lies in its becoming too focused, so that it stunts rather than inspires possibilities. It’s nice to have an “about” when we are writing, but in the end I think it is more exciting and hopefully rewarding to have a “towards” or an “around.” Lately, I have been trying to go to the page with as broad a sense of freedom as I can muster.

Q: Finally, after two trade collections, as well as your current work-in-progress, how do you feel your work is developing? Where do you think you are headed?

A: With each book and book project, I have had a chance to not only explore new intellectual fields but to teach myself something about craft. I’m still an amateur. I am committed to learning something with each new project.

Yesterday I downloaded an undergraduate plan of study for an astronomy major. I’m not sure I’m ready to take calculus again, but I’ve hung the course plan on the corkboard above my desk as a reminder. That’s what I mean about freedom. Every time I go to the page I want to be there not out of habit or obligation, but because there’s something I can do there that I can’t do any place else.
Posted by rob mclennan at 10:45 AM