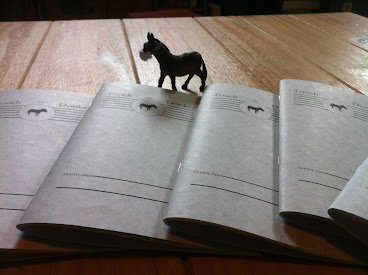 Tom Prime is finishing his second year in the PhD program at Western University in English. He has an MFA in Creative Writing at the University of Victoria (Specializing in Poetry). He has a BA at Western University. He has been published in Brave New Word, Carousel, Ditch, Fjords Review, The Northern Testicle, The Rusty Toque, Lana Turner, Vallum, and Watch Your Head.

His first chapbook, A Strange Hospital, was published on Proper Tales Press. His chapbook, Gravitynipplemilkplanet Anthroposcenesters, was published on above/ground press. This along with the two Serif of Nottingham chapbooks (Birds are the birthmarks of flight and Throat Fixtures: The Almanack of Dazzle) are collaborations with Gary Barwin. He has a mini chapbook on Blasted Tree Press.

His collaborative collection of poems written with Gary Barwin, A Cemetery for Holes, is available from Gordon Hill Press.

His poem “Chekov Was Not There” appears in the twenty-ninth issue of Touch the Donkey.

Q: Tell me about “Chekov Was Not There.”

A: “Chekov was Not There” is a poem that I have been writing for 12 years. The first draft of the poem has almost nothing to do with what the poem is now. You can find the old version on erowid.org. The grammar is unintelligible, and the writing is basically insane. I had just gotten off living on the street for almost 5 years through my late teens and into my early 20s and was on welfare living in a house with a bunch of students. I wasn’t a student and was clearly a person who had taken large doses of sundry chemicals for years. I had just joined a cult, The Jehovah’s Witnesses.

I had begun searching for a psychiatrist and psychologist. Having found a psychiatrist, I was thrust into the world of pharmaceuticals. Having been prescribed Seroquel, I took the medication and had a rare reaction to whatever is in the pills and had to be picked up by an ambulance as my heart was beating at a high rate, and I was experiencing bizarre hallucinations. The police arrived as well and pestered me while I was disoriented. This was not a good start to my getting along with my new roommates, but neither was the Christianity, so I was ultimately not a part of the community within the house. I was placed under watch in a hospital room and had all sorts of strange thoughts and visions. The doctor came in, gave me infinite refills for Valium and sent me home. It took me months to come down from the Seroquel and during that time I wrote the first draft to this poem. I also became addicted to Valium. They put me on a less psychosis inducing medication, and then I ham-fistedly tried to kill myself by popping all the pills I had. This didn’t pan out, and I was back in the hospital.

I only began revising the original draft a couple of years ago. I was trying to get at the tension of that confusing time, so I brought in lines from that first poem and started writing more directly about the suicide attempt as connected with that first and only experience with Seroquel. I eventually cut most of those lines out too.

The title didn’t come to me until after I had written the final draft. During my first few minutes on Seroquel, I was watching Star Trek: The Wrath of Kkan. Things immediately got quite disorienting. The aporia I refer to in Star Trek occurs when Khan—the main villain—claims to have met Chekhov in a previous episode of the since discontinued series. Chekhov had not yet been cast in Star Trek at that point, so Kahn’s statement is an impossibility. I think I probably felt a little like someone who was not there when I was on Seroquel, so it’s an interesting connection. Of course, when you read the poem, you would never get that out of it. In fact, unless you know a bit about math and photography, you probably wouldn’t get much out of the poem at all.

To conclude, I will say that in photography language, using a large F-Stop number results in a blurrier background but sharpens the point of focus. I felt a lot like my madness or psychosis or whatever you want to call it was the only thing I could see for so long. I could not see the world around me or a future. Nevertheless it is a meaningless poem without your knowing these autobiographical details, but I do think aesthetically and linguistically it is an interesting read.

A: It’s actually more of an oddity than anything. None of my poems really sound or read like it. I think that might be due to the length of its gestation process.

Q: What was it about the piece that brought you back to working on it?

A: I liked the strangeness of it, and I think I wanted to construct it in a way that helped me resolve the trauma of how disorienting and inexplicable that experience was. It was a particular time in my life that has been difficult to express accurately due to the confluence of events and my having psychoses and brain damage from a life on the street. I think its not making much obvious sense is the best way to represent my interior experience at the time.

Q: You’ve been working collaboratively with Gary Barwin. How did that experience change the way you approached your own poems? How did those collaborations first come about?

A: Working with Gary has been great. And I think he is a brilliant writer. We have been writing a book for a couple years now. It’s going through huge revisions right now and is becoming something distinct, almost as though it is from one voice. We wrote the entire thing together on Google docs. It has helped me develop more self-awareness and concision. My editing has improved a lot, and I have become more interested in less generic means of expressing myself because of it.

Working with Gary has helped me to think about disability poetics—specifically trauma writing—in new ways because writing about my trauma with someone who doesn’t share that experience is surprisingly inspiring. I think a lot of CanLit poetry can be very much about the writer’s individual experience, their pain, and how through that pain they have come to understand themselves within the world. I find that idea solipsistic and boring. It’s also antiquated. There is nothing unique about having been disabled by traumatic experience. I have complex-PTSD and Schizotypal Personality Disorder. Writing about trauma as if one owns it is also delusional.

Our experiences are mirrored by others in many ways, and our exposing our traumas through our writing does not make us special. It might make us “brave,” but I think that also ignores the fact that we are privileged enough to be heard and to have a voice. There are many people who don’t have that privilege, so I am hesitant to call myself brave. It’s not as though horrific things can’t have happened in similar, even identical ways to others around us.

Through writing with Gary, my individual writing has become much more concerned with depersonalizing trauma, even subsuming it through mundane aesthetics. I use stock market graphs, wiki forms, found Powerpoint presentations for science courses, etc. as things to undermine my individual connection with my own traumatic experience and point to the larger, universal problem of abuse and how abuse is inherently a part of our western society.

I argue that sexual and physical abuse is necessary for the perpetuation of the narcissistic and capitalist society we live in. This abuse is reflected through climate change, environmental catastrophe, and so on. Humans, well generally white humans, are abusive to themselves, their kin, and the world around them. To move beyond the individual experience of trauma and to see it as a symptom of a larger problem has also been liberating for me. I felt fettered to these ideas about “truth” and I spent a great deal of time defining myself as “a survivor,” and that did nothing for me, nothing at all.

I have really enjoyed working with Gary because he is smart and sensitive but also willing to explore uncomfortable realms. I also love that he likes to delete words as much as I do.

Q: With a handful of publications under your belt over the past couple of years, how do you feel your work has progressed? Where do you see your work headed?

A: I guess it will go wherever it goes. I just write because that’s what makes sense to me.

Q: Would you say you are a poet that builds poems or larger projects? Are you working towards a larger, full-sized manuscript, or are you remaining, for now, within the boundaries of the chapbook-length work? Or are these designations, instead, meaningless?

A: I am obsessive and that means my debut poetry collection is taking years to write. Maybe it will be a piece of crap, but I am going to try the best I can to make something fresh. I doubt it will be done for another year. I have a memoirish mixed-genre novel that I have been writing for 12-years. Lol. I don’t know if I will ever be happy with it, but it is fun working on it. I just had a series of pamphlets released by Blasted Tree Press. Kyle Flemmer did a great job and they look amazing. I really want my books to be done, but they aren’t, and I am not in any rush to get them out.

Q: There’s nothing wrong with taking time. I think patience is the biggest lesson I’ve learned, through all of these years of writing. Finally, who do you read to reenergize your own work? What particular works can’t you help but return to?

A: I don’t have time to read work that isn’t on the list of the required readings I have to complete for my final qualifying exam, but I do quite enjoy those readings. I am reading 100 Renaissance plays and most of them have been incredible. Shakespeare, Jonson, and Middleton are quite inspiring. They can be risky playwrights that convey the class system through their upper and lower class characters in really interesting ways. They also write in highly poetically charged language. Of course I am, as a poet, more directly inspired by figures like Barbara Guest and Bill Knott. I really enjoy Tongo Eisen Martin and Aase Berg. Will Alexander is probably a fairly obvious influence as is Erin Moure. Shane Book was my supervisor during my MFA at UVic, and I love his collection Congotronic, so he introduced me to these other writers and inspired me to write in a less solipsistic manner.

I am not too crazy about the wave of confessional poetry in CanLit nowadays, so I can’t really talk about the new scene of my Canadian contemporaries in any meaningful ways. I have tried to read some of it. I guess a lot of it feels very 70s. Everyone seems to be trying to write their “truth,” but I am not really interested in reading about “truth.” I think that we are very privileged to live in a country that allows us poets to write openly about whatever we want to write about. I also think that being white and straight and male and writing about my pain as if it is unique, as I have seen other white writers in this country do, is an abuse of that privilege. It’s also cloying and pensive.